If you have a favorite work by Ivan Turgenev, please share your thoughts. 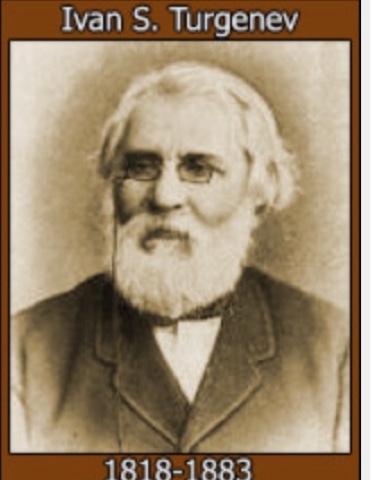 Since I began my blog I have read and posted on Ivan Turgenev's most famous work Fathers and Sons, a few  of his short stories and four of his novellas.  Today I completed one of his lesser know novellas, Clara Militch (1883, in translation by Constance Garnett).  I also read three essays by Henry James on Turgenev, included in the Delphi Publishing's E book edition of the complete works of Ivan Turgenev.  In them James mentions a Turgenev short storiy he especially admired, "Mumu" so I decided to read it.  Frank O'Connor in the leading  book  on the short story, The Lonely Voice A Study of the Short Story said the short stories of Turgenev are world class cultural treasures of the highest order.

Clara Militch is perhaps not as powerful a work as First Love or Faust but it certainly worth reading. The title character is well known actress.  The work focuses on a young man's infatuation with her and his attempt to unravel the reasons behind her suicide by poison.  He has disturbed dreams in which he thinks he sees her.  All and all a decent story with interesting plot turns and well developed characters.

"Mumu" (1868) is set on a large country  estate about 150 Kilometers from Moscow.  Henry James, who knew Turgenev well and greatly admired his work and person, saw the tyrannical capriciously cruel mistress of the estate as loosely based on Turgenev's mother who owned five thousand serfs.  The story does a wonderful job of bring to life what it was like to be a serf.  There are all kind of serfs, from field workers, maids and cooks to physicians (there were two serf physicians, one for the mistress on.y and one for the serfs, neither had the slightest real medical knowledge),  one of the serfs is a huge man, a foot taller than anyone and a deaf mute.  He is a perfect serf, fetching water, keeping the yard up, watching out for intruders and is completely subservient to the mistress.  She moved him from her Moscow estate because he was such a good worker.  He develops a crush on one of the maids.  The problem is that the mistress decides to marry her to one of her other serfs, a business manager, in hopes the marriage will sober him up.  The business manager is happy over the marriage but in fear of the deaf mute.   However the mute accepts what he must.  One day he rescues a three week old puppy from drowning in the river, he takes her back to his garret and names her "Mumu".  The name is one of the few sounds he can make.   As the story progresses Turgenev does a masterful life of letting us see how the mistress runs her estate, taking great pleasure in her power over her serfs.  I really hope others will read this wonderful story so I will leave the deeply moving close unspoiled.