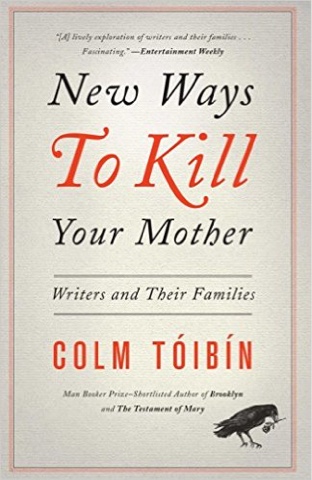 Colm Toibin (1953, Ireland) is one of my favorite writers of fiction.  I especially liked his novel based on the London years of Henry James, The Master and Brooklyn.  Additionally I learned a good bit from his non fiction work, Lady Gregory's Tooth Brush.  I have posted on these works and several of his short stories.  Additionally I have read several of his short pieces on Henry James. When I was notified a collection of his literary essays, Nine Ways to Kill Your Mother Writers and Their Familes was on sale as a kindle for $3.95 happily made the purchase.
Among the Irish writers covered are Yeats, Synge, Joyce, Beckett, Sebastian Barry, Roddy Doyle and Hugo Hamilton.  There is very interesting chapters on Jane Austin and Henry James on the importance of aunts.  Conflicts brought on by the difficulties their families had accepting their sexuality feature Hart Crane,Tennessee Williams and Thomas Mann.  There are two chapters devoted to James Baldwin.  Borges and John Cheever are also featured.
I learned something from each of the essays.  The chapter on Synge and Yeats will reshape my vision of Irish literature.
I  much enjoyed this book and endorse it too all interested  in the subject matter.  The families of writers have many of the same issues non literary families have which gives the book greater interest.
Mel u

Colm Toibin is also one of my favourite authors. Just loved his 'The Master'. I think I have to read it again now that I am much more into Henry James as well. I have this book on my shelves and your review makes me want to read it soon.