Heir to the Glimmering World by Cynthia Ozick - 2004 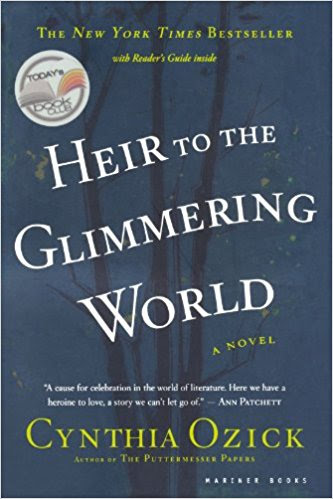 The New York Times Review of Heir to a Glimmering World

A Very Good Biographical Article from The Jewish Woman’s Encyclopaedia

When I was five minutes from finishing Heir to the Glimmering World by Cynthia Ozick I stopped reading.  It was eight PM and I wanted to start my next day with the sad pleasure of completing it still ahead of me.

As the novel opens our narrator Rosa , an eighteen orphan from the Bronx when we first meet her, has just gotten a job as a live in nanny for a family of Jewish refugees from Nazi Germany, it is 1935.  The father was at one time a highly regarded expert on an obscure Jewish sect, far from the main stream.  The mother, in an almost catatonic state when Rosa meets her, was once one of Germany’s leading physicists, an amazing accomplishment for a woman.  As the novel proceeds, we learn gradually the history of the family, she may have had an affair with the famous Ernin Schrodinger, he might be the biological father of one of her sons.  Her husband knows this and we see the impact of this on the marriage.  We see the family dynamics alter and Rosa grows through her relationships.

There is also a difficult teenage daughter and three younger rapidly Americanising sons.  The father is working on a scholarly project, eventually Rosa becomes his helper, the mother’s care giver and nanny for the sons.

The family has a benefactor, a young man named James.  He was the basis for a highly successful series of children’s books his father wrote , sort of modelled on the Winnie the Poo series.  Once his father died he inherited a fortune with a perpetual income from sales.

Rosa is a very bookish young woman,  loves Jane Eyre.  We see her develop, we learn about her strange father.  We see what it was like for the once wealthy refugee family.

The Kindle edition of this book also contains two essays by Ozick, a brief interview and a set of questions to aid teachers and book club groups.

I look forward to reading much more of her work.

I don’t think I could have waited for the next day. Read intil 1.30 amnthe other night to finish a book!
Sounds like another interesting read.

Hi Mel, I am in awe of your ability to wait till the next morning. I wouldn't have waited. I barely have that control. This story sounds beautiful and I am adequately inspired by Ozick's thought on writing. But how does one know if one was a born writer?

I loved this book. I've always meant to read more of her fiction but, so far, have only added some of her essays to my reading experience (also enjoyable, but my heart belongs to fiction).