The Beginning of Spring by Penelope Fitzgerald- 1988 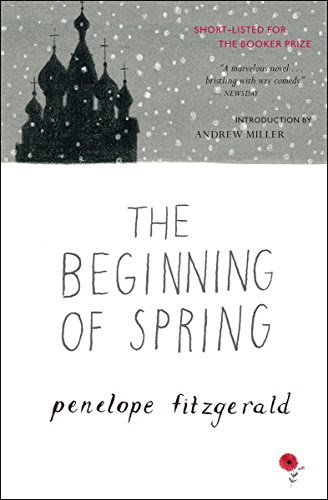 Penelope Fitzgerald on The Reading Life

The Beginning of Spring is the third novel by Penelope Fitzgerald which I have the great pleasure of reading.  Prior to today I have posted on her Offshore, her acknowledged by all masterwork, Blue Flower based on the life of Novalis, one of her numerous short stories and Penelope Fitzgerald:A Life by Hermione Lee.

When I was recently learned the Kindle edition of her The Beginning of Spring was on sale for $2.95 i pushed in a happy decision the buy now button.

The Beginning of Spring takes place  in Moscow in 1913.  The British born wife of an Englishman, himself born in Moscow, has suddenly abandoned him and her three children.  He thinks she probably hated living in Russia and has headed back to London.

The man owns a moderate size print shop.  His business requires his hands on direction so his first priority is to find someone to take care of his three young children.

To me the wonder of this novel is in the many small details.  We see the mass of regulations, each one hiding someone looking for a bribe, his business must deal with.  We learn lots about the many Human Resources challenges his business faces.  We are along for his search for a nanny.

To me I greatly admired how Fitzgerald let us somehow feel tidal wave of destruction coming to Russia on the eve of the Russian Revolution without belabouring things.  People sense danger but they try to remain hopeful.  In one brilliantly done scene a prime minister who had promised to help the peasants and avoid a revolution is assassinated.

Interesting things happen the kids and the nanny.  We wonder why his business manager is pushing a nanny on him, a beautiful young woman.  A mystery about her disappearance is subtly revealed toward the close of the novel.

There are beautiful descriptions of the Russian countryside, especially lovely at the start of Spring that evoked Chekhov and Turgenev for me.

I enjoyed reading this novel and hope to read more of her work.  The average estimated Reading time is under three hours, well worth the time.

Penelope Fitzgerald, that quiet genius of late-20th-century English fiction, who was born during the Great War at the end of 1916, began to publish in 1975. Over the next quarter of a century, she wrote the nine novels, three biographies (of Edward Burne-Jones, Charlotte Mew and the Knox brothers, her father and uncles), and the many essays and reviews that brought her such critical acclaim and a devoted following. In 1995, her haunting masterpiece, The Blue Flower, made her famous in her 80s. Since her death in 2000, the publication of her stories (The Means of Escape), essays (A House of Air) and selected letters (So I Have Thought of You), brought out by her executor and son-in-law, Terence Dooley, and by HarperCollins, have sustained her posthumous reputation.

This sounds like an intense book and I love intense books. I haven't read Penelope Fitzgerald at all. I must try soon.

She is one of my MRE (Must-Read-Everything) authors and I was just thinking, the other day when I was visiting a different branch library (for a certain short story!), as I picked up The Blue Flower to pet it briefly before returning it to the shelf, that it has been too long since I peeked into her prose. I'm glad to hear you enjoyed this one so much!