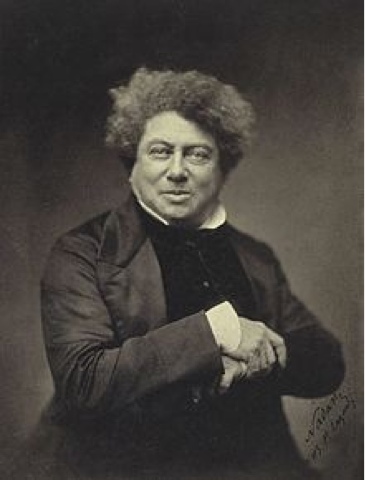 I read The Count of Monte Cristo by Alexandre Dumas (1802 to 1870) when I was at ten or so years.    I remember thinking this must be the greatest book ever written.  Maybe my judgment was a bit premature but based on the number of movies made of the story, the plot must have universal appeal. I soon went on to The Three Musketeers.  Dumas was a very productive writer.  If he were living now he would probably be fabulously wealthy with all his books pre-sold to Hollywood for millions.  I know he is not considered the literary equal of Balzac, Zola, Hugo or de Maupassant but his work brings pleasure still to millions.   I know there are still ten year old boys out there amazed by The Count of Monte Cristo.
"Solange" is set in Paris during the time of terror right after the French Revolution.   In its twenty or so pages it contains most of the elements that made his big novels so popular.  We have a beautiful young aristocratic woman pretending to be a laundry woman who desperately wants to save her father from the guillotine.   The story is told in the first person by a citizen of good standing who helps the woman when she is stopped in the street and had no pass.  The man vouches for Solange.  He can tell from her demeanor and other clues that she is an aristocrat.  She soon reveals she is trying to get her father to England to save him from execution.  A melodramatic plot develops.  They fall in love.  Then in a twist of plot that would have most contemporary M A programs saying, "oh come on" we find the man is making a scientific study of the bodies of those guillotined, he gathers the bodies from the pit in which they are thrown and takes them back to an abandoned church and lays them out for study on the alter.  One morning two laughing executioners bring him a body sack.   The sack is still moving.  It contains the head of Solange. Her removed from her body head speaks to him.  Her final words were either very emotional if you can keep in sympathy with the story or they might make you think here an author really reaching to wring as much pathos out of a story as he can.
If you Google search it you can find this story online.  I enjoyed reading it and reminiscing about first reading Dumas.
This is my third year as a participant in the Paris in July Reading Event hosted by Book Bath and Thyme for Tea.   I find this a very interesting and creative event of the sort that helps build the book blog community.  You will find  lots of reading ideas on the host blogs.  I am greatly enjoying participating in this event.  It has motivated me to revisit the work of some of the true giants of European literature, Marcel Proust, Guy de Maupassant, Andre Gide, Honore Balzac ,Zola and now Dumas. I plan to next post on a short story by Anatole France.
Mel u

I love Dumas but I haven't even heard of this one. Thanks for reviewing it!

This book does sound fascinating. Even I read The Count of Monte Cristo when I was a kid. I haven't read The Three Musketeers, but your lovely review makes me want to read Solange first! I wish I hadn't read about that twist though..

The end is extremely painful and tragic.