"An Affair in Paris".

This is my third year as a participant in the Paris in July Reading Event hosted by Book Bath and Thyme for Tea.   I find this a very interesting and creative event of the sort that helps build the book blog community.  You will fund lots of reading ideas on the host blogs. 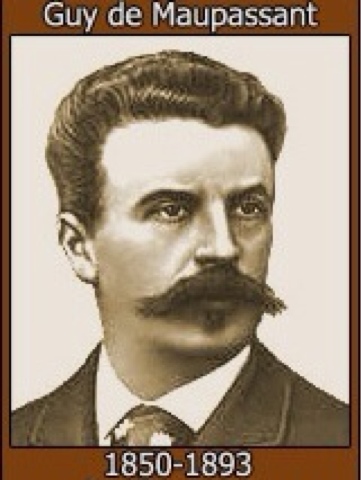 Guy de Maupassant wrote about 300 short stories.  By consensus about ten of them are among the very best ever written.    One of my long term Reading Life projects is to read all of his short stories.   He wrote fast and he wrote for money and to please magazine editors who often wanted clever surprise endings.   He loved Paris but he did not worship her.

Ok not the most politically correct translation of this title but it is a fifty year old public domain translation.   This story centers on a night out in Paris by a solidly middle class bachelor.   He is a notary and his biggest avocation is music.  He subscribes to the new offerings of leading music publishers and his big occasional night out is a train trip into central Paris to go to a concert of the latest stars.  He stops in at a tavern near the performance venue and a man near him is talking to his friends about a big party at his place set for tonight.   Many of the top musicians of the day will be there.  The man gets himself invited and is very excited.  He pays out of gratitude for the meals of his new acquaintances and goes to what the party host says is his house.   When he gets there nothing is prepared and the place looks pretty tawdry for the planned event.   Of course all is not what it appears to be and there is an O. Henry like close I enjoyed.   Not greatest of his  stories but I liked it a lot.

The story begins with some sure to offend 21th century sensibilities generalizations about what all women are like.   The central character in the story is the wife of a small town attorney.  She has never been to Paris but for years she has day dreamed about what life must be like their.  She has created in her imagination a city of amazing pleasures and complete decadence.   She makes up an excuse to go to Paris alone, knowing it is at a time when her husband cannot go, and takes the train to Paris.  In wide eyed amazement she imagines every woman she sees is a famous and scandalous actress and every man a person of great refinement and culture.  She wanders into a curio shop.  A well known author is bargaining with the shop keeper over a Japanese ceramic (very big in Paris at the time) but he declines saying he cannot afford it.  On an impulse the she buys it and offers it as a present to the shocked author.   He asks her how can he thank her.   She says she wants to spend the day with him.  She follows him on his walks, to his tavern haunt and to the theater.  Then in a scene that may have shocked his first readers (and sold a lot of magazines!) she goes home with him, when he retires she goes into his room, strips off and has sex with him.   Of course there is a moment at the end where her guilt overcomes her.   I enjoyed this story a lot.

I have in mind reading during July in Paris short stories by Henry James, F. Scott Fitzgerald, and if I can get to them a story by Colette and "The Purloined Letter" by Edgar Allan Poe.