"Goodnight Nobody" by Ethel Rohan 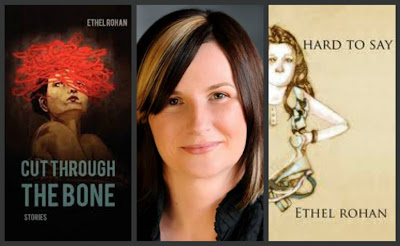 My Prior Posts on Ethel Rohan

"He leaned back into his driver's seat, closed his eyes, and waited to feel something for the dead man".

I am always happy anytime Ethel Rohan publishes a new short short.   I have posted on two of her collections of short stories, several of her stories and she has contributed a guest post as well as a very illuminating Q and A session.  I am very convinced that if someone does an Irish Short Story Month 25 years from now for sure Rohan will be by default included.    I admit I like to imagine someone finding my first posts on her work decades from now and wondering who Mel u was that saw the potential for greatness in the work of Rohan.   I know this may seem hyperbolic to some but it is how I feel.

"Goodnight Nobody" is a short work about what happens when a San Francisco garbage man finds, for the first time in his thirty years on the job, a dead body in a dumpster.    The man looks in the dumpster twice to be sure he was right,  yes it is the body of a sixty year old or so homeless man.    Of course he calls the police and his boss.   He is moved to think of the last corpse he saw.  It was the body of his wife of thirty-three years.   While he waits for the police to do their inspections, he think of hi years with his wife and of his visits to her grave.   He goes back to the dead man and regrets he can feel nothing for him and is a bit ashamed of himself when he realizes if it was a pretty young girl he would feel something for her.

There is a lot in this very moving story.


Ethel Rohan is the author of two story collections, Goodnight Nobody (forthcoming Queen’s Ferry Press, September, 2013) and Cut Through the Bone (Dark Sky Books), the latter named a 2010 Notable Story Collection by The Story Prize. She is also the author of a chapbook, Hard to Say (PANK, 2011). Winner of the 2013 Bryan MacMahon Short Story Award, her work has or will appear in the New York Times, World Literature Today, Tin House Online, The Irish Times, Sou’wester, Post Road Magazine, and The Rumpus, among many others. She reviews books for New York Journal of Books and sometimes elsewhere.
Mel u