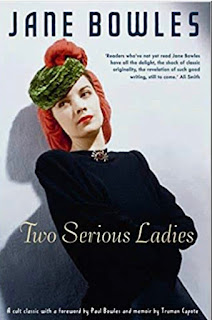 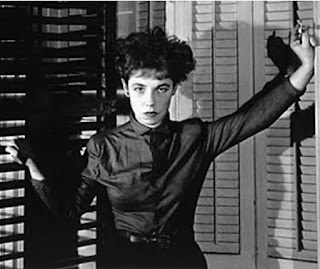 Published when she was twenty six to an initial luke warm reception by baffled critics, Two Serious Ladies is now viewed by many, myself included, as a work of genius, if a fey one.

As you might guess, it centers on two ladies, back in 1943 being called a “lady” still carried connotations of gentility and refinement.  Part of the deeper theme, as I see it, of Two Serious Ladies, is a presentation of an unraveling of this facade. It is set  in Colon, Panama during a far from undecided World War. Colon is described as “full of nothing but half breeds and monkeys”.  Here one of two serious ladies, Frieda Copperfield, dumps her respectable but boring husband in favour of a teenage prostitute, Pacifica.  She ends up happily, sort of, living with her in a hotel full of the throw offs of Europe looking for an escape from the old world.

As the novel opens we meet other serious lady Christina Goering (I wonder if in 1943 this name brought to mind a then high ranking German or was it a coincidence).  Christina’s father is, we are lead to think, a wealthy American industrialist.  The two women have their own plot lines that do not converge until near the end.  Both women Love to insult others.  There is heavy drinking for sure.  Nobody is sober for long if they can help it.

The treatment of prostitution between Freida and Pacifica is very interesting, female to female sex trade is even now not much written about.  Everyone in Colon has something wrong with them.

The potrait of the residents of Colon may strike many as insensitive.  Terms like “half breed” and “monkeys” need to be fitted into novel and The time.

I read this in My Sister’s Hand in Mine: The Collected Works of Jane Bowles.  There are brief articles by Joy Williams and Truman Capote.  Capote was a close friend of Jane and her husband and offers very interesting memories. Joy Williams was given the  collection by her mother, first published in 1966, when she was sixteen and dreamed of being a writer.   She shares with us her first reaction:

“I did not know what to make of this object at all. There was no discernible narrative strategy. There was no way of explaining or analyzing the processes at work. Interpretation was useless. The vistas were dispiriting, the food foul, the wind always howling. Her people were mournful, impulsive, and as erratic in their peculiar journeys’ flights as bats. They were very often drunk. They thought continuously, obsessively, but had no thoughts exactly, no helpful method of perceiving the world or their positions in it. As Miss Goering, one of the serious ladies, remarks just before committing herself to an unsavory adventure.”


There are six Short Stories and several  fragments and a play in the collection.  Truman Capote says her best work is the story, “Camp Cataract” and I hope to read it soon.

There is a concise bio of Jane Bowles at Paulbowles.org


“Jane Bowles's total body of work consists of one novel, one play, and six short stories. Yet John Ashbery said of her: "It is to be hoped that she will be recognized for what she is: one of the finest modern writers of fiction in any language." Tennessee Williams called her the most underrated writer of fiction in American literature. During her lifetime and since her death in 1973, she has been considered a writer's writer, little known to the general public but with a loyal following of intensely devoted readers. “ from Paulbowles.com. By Millicent Dillon

I have not seen The L O A edition, it has works not in The FSG collection, but no published works just fragments and letters.At $7.95 for the Kindle edition by FSG versus $30.00 for the hard back LOA, go for the Kindle.


Jane Bowles lives on in hearts of her readers, sadly to most just Mrs. Paul Bowles. 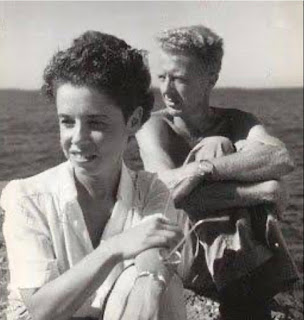 "Nobody was sober for long if they could help it." LOL There are quite a few books that come to mind with this statement actually!

This has been on my shelves, unread, for years, but I'm not sure if I ever knew it was short stories, which of course interests me greatly (maybe I knew and forgot)!