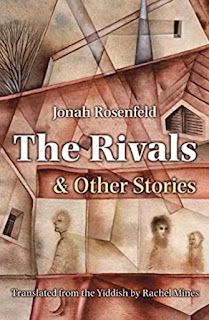 Syracuse University Press is a world leader in the publication of Jewish heritage books.

“A significant portion of the literature written in Yiddish and translated into English over previous decades presents a rather stereotyped and sentimental perspective on the European Jewish experience in the late nineteenth and early twentieth centuries: a shtetl life, not without its hardships and conflicts, but based on a firm bedrock of tight-knit Jewish families and communities.”

The stories of Jonah Rosenfeld, if the total story, “The Rivals” is an indication, present a side of shtetl life far from the world of Fiddler on the Roof.  The stereotype of a shtetl  Ashkenazi family involves a very close knit family, though not without some drama.  The father is knowledgeable in Talmudic lore and Ashkenazi tradition.  He is totally devoted to his family.  The wife is a dedicated homemaker.  A big family concern is finding good marriage matches for the children.  Respect for the father as the head of the family, even if his wife really runs things,is a given.  There is a deep family love bonding everyone, through good and bad times.

Rosenfeld takes us into a very different world, lacking in sentimentality or reverence for tradition.  The stories of Jonah Rosenfeld, if the total story, “The Rivals” is an indication, present a side of shtetl life far from the world of Fiddler on the Roof,without sentimentality or a rose colored picture of family life, one in which love never turns to hate. 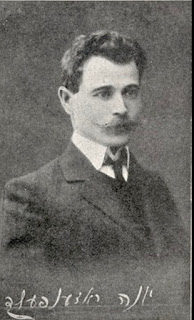 Born 1881 in Staryi Chortoryisk, Ukraine, then a part of the Russian Empire


“The Rivals” is narrated by a married man with a daughter ten, a son seven and one two.  His descriptions of his children are far from flattering, none sound healthy or well cared for.  Here is how he describes himself and his daily routine:

“A short man with a thin little beard and small black eyes—that’s me, myself, I—the husband of the wife and the father of the three kids. What do I do? Nothing at all—I do women’s work. Early in the morning, as soon as I get up, I start a fire and boil a kettle of water. Then I wake up my wife, give her a glass of tea, and walk her to the market. After that, I start with the kids: I get them dressed, wash them, and keep an eye on them.”

At lunch time he goes to take some food to his wife who supports the family selling vegetables at the market.  Inevitably a fight breaks out, clearly his wife is humiliated to have such a husband.  He describes violent encounters where they hit each other and he ends up leaving the house.  When he comes back he will look through the window.  The ten year old daughter is taking care of her brothers, helping her mother.  The narrator sees this as a threat.  She is trying to show his wife he is unnecessary, a useless drain on the family.

As the story develops we see a very real rivalry develop with the daughter not hiding her contempt for her father.  Rosenfeld portrays  family turmoil in a way I have not see before in Yiddish literature.
They come to hate each other.

I will leave the very striking close of the story untold.

From the publisher Syracuse University Press

"This comprehensive collection of Jonah Rosenfeld’s piercing short fiction is an original contribution to the art of Yiddish short fiction in English translation."—Jan Schwarz, Lund University

"Mines' translation into readable, contemporary English grants overdue recognition to a writer whose work has been called by the YIVO Encyclopedia of Jews in Eastern Europe "a hidden treasure of modern Yiddish literature.""—Congress of Secular Jewish Organizations

I look forward to reading the other eighteen stories in the collection.

Rachel Mines has a PhD from King’s College, University of London (2000), where she specialized in Old English language and poetry. A child of Yiddish-speaking Holocaust survivors, she has been studying Yiddish language and literature since 2007. One of her goals in translation is to make Yiddish literature available to college and university students, Jewish and non-Jewish, who would not otherwise be exposed to it. Rachel has taught at King’s College (London), the University of British Columbia (Vancouver), and now teaches at Langara College in Vancouver, where she lives. Aside from Yiddish, she is also involved in Holocaust education and outreach in Skuodas, Lithuania, where her father was born and raised. Her project website is www.shtetlshkud.com.