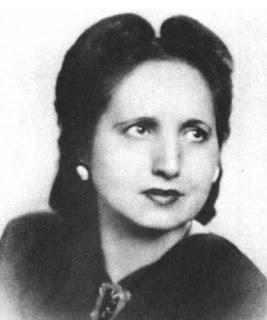 Immigrated 1904 to Montreal, with her parents

Sarah Hamer-Jacklyn was a long time preformer in the Montreal Yiddish Theater.  Second to New York City, Montreal had a large number of Yiddish immigrants.  While merging with much success into Canadian society, they cherished their heritage.

In addition to acting, Hamer-Jacklyn was a very frequent contributor of short stories to Yiddish language periodicals.

"She Found an Audience" 1954 - translated by Alisa Poskanger


I was very happy to find on The 2020  Digital Edition of Pakn Treger  from The Yiddish Book Center a story that can be read online, “Letters”.

You may read this story here.


“Letters” is set on a ship leaving from New York City to Rio de Janeiro.  A thirty six year old woman has accepted the invitation of an aunt to relocate in Brazil.  She carries with her letters dating back 18 years to very recently from a married man with whom she had a very long running relationship.  When they first meet he tells her he will soon divorce his wife and marry her.  Now she goes on deck trying to get up the nerve to throw the letters in the ocean.  Letters begin to come in from all over Europe as his business grows.  He always tells her how much he loves her and how his wife will not consent to a divorce.  As we read the letters we see he obviously has no plans to actually marry her.

The woman’s agony as she cannot stand to admit it has all been deception are very well developed in just a few pages.

I liked this story a lot.

Here is a sample:

“Nina leaned over the railing of the ship. Her outstretched hand, trembling as it clutched a small box, was extended toward the sea. Soon she would open her hand and the sea would swallow up all the letters that had brought her warmth, promised her happiness, for so many years. She used to call it her “sacred box,” and because of it she had given away the best years of her life; now it seemed tainted, deceitful. She could neither keep the letters with her nor part with them.
She had been between water and sky for twelve days. Almost every evening, when the sky above the endless ocean began to darken, Nina would come out to the deck and station herself by the railing. For the life of her, she could not bring herself to fling the letters overboard once and for all, to let them decompose on the ocean floor. Day after day, she would stay until nightfall and then bring the box back to her cabin.
She would read them over one more time, and tomorrow it would happen, she decided resolutely. She wanted to arrive in the unfamiliar place free of the nightmare that had held her captive for half her life. She had given eighteen of her thirty-six years to Jacob Waldman.”


Sarah Hamer-Jacklyn (1905–1975) Born in Novoradomsk, Poland, Sarah Hamer-Jacklyn immigrated to Canada in 1914. Captivated by the Yiddish theatre in Toronto, she began her career as an actress and singer at sixteen. Retaining her love of Yiddish as well as her dramatic connection with the theatre, her short stories serialized in the Canadian Yiddish daily Der Keneder Adler, as well as in major literary journals, depict a wide range of subjects spanning shtetl life, Holocaust narratives, and women’s search for creative expression in America. Her collection of short stories, including Lebens un gestalten ( Lives and Portraits) and Shtamen un tsveygn ( Stumps and Branches), published in the 1940s and 1950s, were received with critical acclaim. From The Exile Book of Yiddish Women Writers / edited by Frieda Johles Forman


Miranda Cooper is a New York–based writer, editor, and literary translator. Her translations from Yiddish have been published in Jewish Currents and Pakn Treger, and her literary and cultural criticism has been published by Kirkus Reviews, Jewish Currents, Tablet, JTA, In geveb, Alma, the Jewish Book Council, and the Yiddish Book Center. She currently serves as an editor of In geveb and was a 2019 Yiddish Book Center Translation Fe