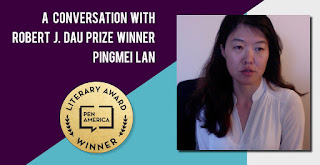 
“Cicadas and the Dead Chairman” by Pingmei Lan. Was First published in Epiphany, Fall/Winter 2018.

An interesting interview with Pingmei Lan

A Conversation With Pingmei Lan on her creative process

The annual Pen America Best Debut Anthology of Short Stories is a smart  way to get a feel for the state of the American Short Story.  This year’s collection has twelve stories chosen for the Dau Prize,
out of hundreds nominated, by the judges Danielle Evans, Alice Sola Kim, and Carmen Maria Machado, all by writers who had never published fiction before 2018.  Each author receives $2000.00.

I posted last month on “Today, You’re A Black Revolutionary” by Jade Jones.

Today’s story takes place in China in 1976, shortly after the death of Chairman Mao Zedong.  The impact of this on his devotes was immense.

The narrator is grown woman reflecting on her experiences as seven year old girl, as she was when the Chairman passed. Both of her parents were graduates of re-education camps.

“ONE DAY, I decided to ask Dad about the old maid. My parents were propaganda writers for the Department of Education eager to please their party secretary. Dad, however, had a bad cough from his days in an education camp. So sometimes he gazed out the window when he was supposed to be working. This is what he was doing while Mom slaved over “Virtues of China’s Own Brand of Democracy.”

This is a strange, weird and wonderful story, focusing on the relationship of the precocious girl with a mentally impaired homeless woman.  It is from her the girl first heard about death.

I loved these lines for the way they show the woman’s memories, intermingling myth and half understood realities:

“She lived in a cave for ten years and ate mushrooms that grew on the walls. She was a white snake who turned into this thing when she ate the magic ginseng roots from the Manchurian mountains. I preferred to think of her as having been born that way, with hair frosted by Yan Wang’s brew to prove her connection to the underworld. Her eyes too, they had this dark pull, at once mercurial and warm. Her lashes were pale and shiny like the hooks fringing a Venus flytrap. I imagined men who inched closer, willing to latch on. They’d follow her into this other place, where gremlins made decisions to either feast on the dead or send them back to life untouched.”

After this, I was hooked.

She befriends the woman.  One day a group of workmen begin to harass her and menace the girl.  They take off running.

“When I squinted, I saw a ball of white light bursting through the pagoda’s canopy. Tian Gong, the sky’s emperor, seemed to be staring down at it, or at me, with disapproving looks. When my eyes began to water, I turned to see the old maid lying down on her side. On the back of her neck was a blue-black bruise. I rubbed my eyes. I was about to ask her about it when something small and hard fell on my head. I froze, a scream rasping in my throat.  She leaped up. “A cicada!” she said, picking the nugget of black out of my hair. “It’s dead. That’s why it was screaming. Her last song.” I breathed hard, unsure of what to say. She plopped back down to show me the cicada, then shoved it in her mouth. Maybe she only took a bite. Either way, a squirt of green liquid flew out, thin and curling, like a snake. I shut my eyes. But it was too late. She laughed and smeared something damp on my hand. “Look. Green blood. Isn’t that cool? No red. No red. No red at all! That’s what I like.” When I tried to reply that that was a dangerous thing to say, I threw up green bile.”

Normally I don’t quote so much text but here I just cannot resist.

I will leave the remainder of this in fact deeply tragic on numerous levels story for you to read. It presents a cruel society with little space for those who do not fit in.  The relationship between the two central characters was marvelously brought to life.

“Cicadas and the Dead Chairman” by Pingmei Lan justifies me in my decision to acquire this collection.  I hope so much to read a lot more of Pingmei Lan’s work.


Pingmei Lan grew up in Beijing, China. She received her MFA in creative writing from Pacific University in 2018. Her work appears in Epiphany, Tahoma Literary Review, Crab Orchard Review, and other publications. She lives in San Diego.

wow! this reminds me of one of those Chinese mythological movies we watch some times... definitely weird

Mel,
I am intrigued by this author's work. Wonderful intro to her work and review!