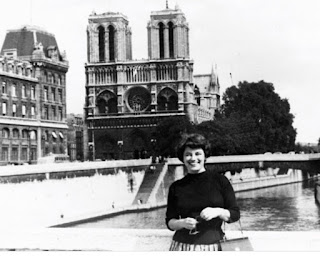 This story is included in The Collected Short Stories of Mavis Gallant and her collection, Across The Bridge.

Buried in Print is doing a full read through of the short stories of Mavis Gallant,one of the masters of the form.  She began in March 2017 and anticipates finishing in the fall of 2020.  I have access to about half of her stories and have been following along as I can since March 25, 2017, starting with "The Other Paris".  The full schedule is on her blog and all are invited to join the project.

Today’s story is narrated by a Parisian woman. The story is structuted around the changes in Paris that upset her and the chsnges wrought in her life when Mlle. Dias de Corda rented a room from her.

“YOU MOVED INTO my apartment during the summer of the year before abortion became legal in France; that should fix it in past time for you, dear Mlle. Dias de Corta. You had just arrived in Paris from your native city, which you kept insisting was Marseilles, and were looking for work. You said you had studied television-performance techniques at some provincial school (we had never heard of the school, even though my son had one or two actor friends) and received a diploma with “special mention” for vocal expression. The diploma was not among the things we found in your suitcase, after you disappeared, but my son recalled that you carried it in your handbag, in case you had the good luck to sit next to a casting director on a bus. The next morning we had our first cordial conversation. I described my husband’s recent death and repeated his last words, which had to do with my financial future and were not overly optimistic.”

When she first moves in the narrators son is still at home.  Later she describes her daughter in law as of “mixed descent” because two of her grandparents were Swiss.

We get a good picture of her preoccupations in these lines:

“I suppose no amount of coaching at a school in or near Marseilles could get the better of the southern o, long where it should be short and clipped when it ought to be broad. But, then, the language was already in decline, owing to lax teaching standards and uncontrolled immigration. I admire your achievement and respect your handicaps, and I know Robert would say the same if he knew you were in my thoughts.”

She speaks of “Asian colonization” of her neighborhood.

She begins more and more like a Parisian version of a Brexit supporter or an American Xenophobe:

“According to this report, by the year 2025 Asians will have taken over a third of Paris, Arabs and Africans three-quarters, and unskilled European immigrants two-fifths. Thousands of foreign-sounding names are deliberately “lost” by the authorities and never show up in telephone books or computer directories, to prevent us from knowing the true extent of their progress.”

Of course her math makes no sense and no one knows anything about the report.

As time goes by, long after she moved out, Mlle. Dias de Corta begins to appear on French TV.  Following her Career helps narrator stay connected to a Paris in which she increasingly feels is “not her Paris”.

In just a few Gallant illuminates the attitude of many Parisians to what they see, in a politely expressed fashion, as degredation of the City they loved.

Like Buried in Print remarked, this is one of my favourite Mavis Gallanf Stories.

Mel, this story sounds wonderful. I would like to read The Collected Short Stories of Mavis Gallant and her collection, Across The Bridge.

It's a pleasure to share the reading of these stories with you: I'm so content to hear that you really enjoyed this one too. It's so simple, and so much a product of its time, and also feels like it could have been written this year. I wish we could know more about Mlle.