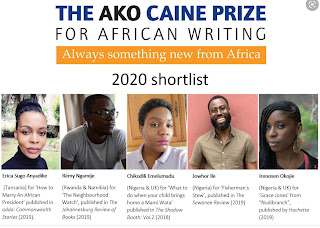 You can read all five stories and learn about the importance of The Caine Prize here.Here

An interview with a link to three of her earlier stories as well as very interesting bio data provided by the author.


I first began reading and posting on The Caine Prize Stories in June 2011.  I think I was the first blogger of any sort to post on them.  Now book bloggers, country specific  cultural blogs and African focused political blogs take interest in what countries are represented in the nominations in subsequent years.

This is Chikodili Emelumadu’s  second time to have a story in the final five for The Caine Prize.  In 2017 her story “Bush Baby” was among the finalists.

“What to do When Your Child Brings Home a Mami Wata” is a delightful very creative story.  Kind of a mix of Science Fiction, satire on advise to parents works and a genre of short works I am just getting into, weird fiction.  It is also a saltire on government prose.  It is also a kind of mini-course in Ibo riverine folk lore about semi humanoid acoustic creatures.  The purpose of the paper is to tell parents of boys what to do if their son has a Mami Wata”
paramour. Deeper in, the story can be seen as mocking extremism in sexual conservatism.  Evidently the Mami Wata goes almost exclusively for teenage boys.


From the opening paragraphs I knew I was reading something very special:

“Please note: ‘Mami Wata’ (also known in various other regions as ‘Mammy Water’) is used in this context as an umbrella term for both genders of the popular water entity (i.e. Mami and Papi Watas) and does not represent those other mer-creatures without the appearance of absolute humanoid traits. For these other non-humanistic water entities including but not restricted to: permanent mermaids and mermen, crocodile fellows, shark-brides, turtle crones and anomalous jelly blobs of indeterminate orientation, please see our companion volume, ‘So You Want to Kill a Mer- Creature?’ which will guide you through the appropriate juju framework to avoid or deflect repercussions and will elucidate general and specific appeasement rituals. See also, ‘Entities and Non-entities: The Definitive Legal Position on Aquatic Interspecies Marriages, Non-Marriage Couplings and Groupings”

This story reads like something the Jonathan Swift who wrote “A Modest Proposal” would admire and respect.

I cannot imagine anyone not loving this story. You will find this a welcome pleasure in these times, I certainly did. 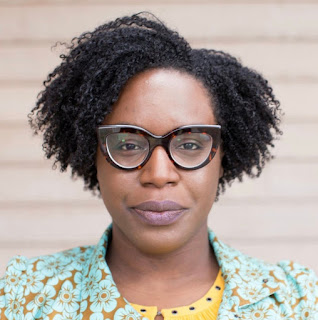 Shirley Jackson shortlist 2015
Caine Prize shortlist 2017
Curtis Brown First Novel Prize winner 2019
AKO Caine Prize Shortlist 2020
She was born in Nigeria and moved to the UK at an early age then she and her family moved back to Nigeria as she moved home.  As a child her parents made her read English classics and the complete Encyclopedia Brittanica.

For sure I would purchase a collection of her stories. I hope to follow her for a long time.