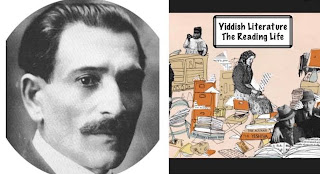 Published in 2020 in the Pakn Treger Digital Translation Issue,  from The Yiddish Book Center

You may read today’s story here.

He begins a very prolific literary career with thousands of published works, for many years he contributed a weekly short story to the Forvert, the leading Yiddish language publication in America

I last read a work by Avrom Reyzem January 20, 2019. My post with a link to another story is here.

This is the third short story by a Yiddish language author I have so far read this month.  Like the prior two stories, “New Bosses” is sbout getting used to life in America.

The story is focused on a rabbi , getting used to his New York City
congregation versus the old days back in Russia.  Back home he was secure in his social position, less so now.  People no longer look up to him just because he is a rabbi.  On the good side, he no longer has any problems feeding his family as he once did.

“After the several more-or-less lean years that the rabbi, Reb Zerach, had experienced in his shtetl, the first part of his life in America seemed surely like a dream.
Here, food was plentiful. If only in his old age he had an appetite to match, for back home in the shtetl he had already gotten out of the habit of eating. But he was pleased that his second wife, fifteen years younger than he, and the smaller children were no longer wanting and, indeed, were content.
Contrary to his life in the shtetl, occasionally he would sigh: “Too many worldly pleasures . . .”
But the rabbi would have been less troubled had he been secure with his congregational position. This English word congregation was far more difficult for him than a Russian word back in the shtetl. Nevertheless, it was a friendly, homey congregation, named for that same shtetl where he had served as rabbi. The people here were vastly different. True, they all came from the shtetl, but they weren’t the same anymore. They had changed, particularly in their behavior, as if they’d assumed new identities. Even the gabbai of the shul had no beard or mustache. This bothered the rabbi. Back home he wouldn’t even have deigned to speak to such a man, but here he was obliged to talk to him, and politely too, as if with a superior.”

The leaders of his New York City temple stop by his house.  They tell him to spice up  his sermons, more fire less quoting from the Talmud. He is offended but he knows this is a new world.

The conversation of the rabbi and his wife is a gem:

“What’s wrong with me?” the rabbi repeated. “I don’t know myself . . . All this isn’t for me . . . They tell me I must adapt, become less of a greenhorn . . . Who knows? Perhaps I ought to shave off my beard,” he said, looking at his wife with a bitter smile.
“They’re not asking you to shave off your beard,” she said earnestly. “But you should remember that you’re not back home. It’s a new world here, Zerach . . . and perhaps it wouldn’t hurt to comb your beard.”
“And buttering up these gruff boors wouldn’t hurt either, right? Isn’t that so, rebbetzin?” the rabbi said in a louder tone than usual.
“Buttering up? God forbid!” his wife said as if frightened. “But you have to be friendly with them. They’re all rich here, may the evil eye spare them. They live like lords.”
“But what happens if they don’t like my sermons? There’s too much Torah erudition for them—so what should I do?” The rabbi almost burst into tears.
“Don’t worry, you’ll catch on! Why don’t you drop in on another shul and listen to their rabbi’s sermon? Throw in a word of English. Remember, the shtetl is gone, and I don’t miss it at all.”


This is a fun story.  I do not know when it was first published.  If you do let us know.

Curt Leviant has translated several volumes of works by Sholom Aleichem, Chaim Grade, and other leading Yiddish prose artists. Some of his own ten critically acclaimed novels have been translated into Hebrew and into nine European languages.