Dame Beryl Bainbridge is regarded as one of the greatest and most prolific British novelists of her generation. Consistently praised by critics, she was shortlisted for the Man Booker Prize five times, won the James Tait Black Memorial Prize and the W. H. Smith Literary Award, and twice won the Whitbread Award for Novel of the Year.   She was born in Liverpool in 1932 and died in London in 2010.

Beryl Bainbridge On The Reading Life 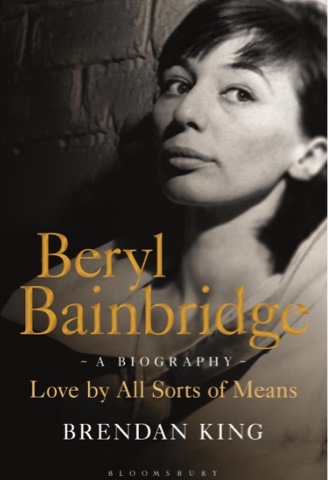 Brendan King was Beryl Bainbridge's secretary and literary assistant for the final  23 years of her life.   Additionally he had unprecedented access to her letters and was on close terms with many of her friends, lovers, and publishers.

Bainbridge's life was chaotic, full of excesses, lots of lovers, financial ups and downs, a good bit of whiskey.  Not to long ago I decided to read all of Bainbridge's seventeen novels.  So far I have read eight.  King devotes a lof of space to showing how about half of her novels arose from her early years working in the theater, The Bottle  Factory, one of my favorite of her novels, was inspired. by her work in such a place, and her romances.  (She at one point complied a list of seventeen lovers). We learn she liked sex, in addition to the lovers, it appears there may have been some same sex relations also there were a good number of no name one time encounters.  About half of her novels were contemporary set in England.  King tells us that about half way through her literary career Bainbridge felt she had fully mined her personal life and began to write historical fiction.

King lets us see the importance having a good and caring publisher became to Bainbridge.  Her publisher even gave her a make work job in their office.  King shows us she was not a great money manager.  Some of her novels sold well and movies were made from a few of her books.

King devotes a lot of space to explaining how her life produced her books,  we learn about her very serious research methods for her novel about Robert Scott's expedition to the South Pole, Birthday Boys.  Kings takes us deeply into Bainbridge's time working in regional British theater.

Brendan King has written an illuminating highly emphatic very detailed biography.  He had intimate knowledge of her life and I felt I knew her through King's account of her life.

Bainbridge was a warm, wise, and witty writer, best shared with a generous shot of rye whiskey.

Beryl Bainbridge A Biography Love By All Sorts of Means by Brendan King is s not just a  very good biography, it is a first rate social history and a brilliant account of a woman's struggling to make a living through her writings.  Bainbridge had her demons and King kelps us understand them.  He takes us through her most important relationships, her trials as a mother and a wife.  Bainbridge was also a painter it was a great pleasure to learn of this.

I am very glad I read this book.  I recommend it to all lovers of literary biographers and of course to fans of Dams Bainbridge.