The Caine Prize for African Writing will be awarded on July 11 at an award dinner in Oxford.    The Caine Prize is one of the world's top literary awards.    It is given to the author of a short story from a country in Africa.   (There is additional background information on the award in my prior post and on the Caine Prize Web Site.)    This month I am doing a series of posts on the five short stories that are short listed for the 2011 Caine Prize.

So far I have posted on "Hitting Budapest" by NoViolet Bulawayo,  "What Molly Knew" by Tim Keegan ,  "Butterfly Dreams by Beatrice Lamwaka and "In The Spirit of McPhineas Leta" by Laura Kubuisite.   I have enjoyed reading each  of these stories and am glad to have had the opportunity to post on them.    All four stories are very much worth reading.

There is only one living person in "The Mistress's Dog", the wife, Nola, of a powerful business man, now deceased.    We do not know her exact age but it seems to be at least in her sixties.    She was married for many years to man we know only as "a powerful business man".    Her husband had the same secretary for thirty years.    For at least fifteen of those years she was the husband's mistress.

As the story opens Nola is home alone but for the dog of the mistress who is sitting in her lap.   Nola thinks "I have always preferred cats".     This story is really tightly and beautifully written.   There are a couple of word choices that seem a bit awkward but other than that it is really a superb short story.    It is very interesting to see the mistress through the eyes of the wife.   We also can sense  the changing nature of their relationship over the years.    It is as if the wife almost feels sympathy for the mistress as she senses the powerful business man losing his ardor for the mistress just as he had done for the wife.

This is such a well ploted and characterized story that I do not want to spoil it at all.

It can be read on line at Caine Prize web page.

I think part of the high quality of this story originates in Medalie's obvious respect for the intelligence of his readers.    Medalie is a Professor of English at Pretoria University in South Africa.   He is the author of a novel, The Shadow Followers, that was short listed for a Commonwealth Literary award and a collection of short stories.

As I said, this is my pick and guess for the winner of the 2011 Caine Prize.    My second choice is a tougher question.   I will pick "Butterfly Dreams" as it has multiple layers of meaning.

I will be reading the 12 Caine Work Shop stories in July and will post on each of them, maybe in groups maybe as  individual posts, depending on my reaction to them. 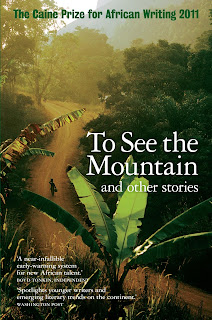 I think To See The Mountain and other stories which has 17 short stories should be a part of every school and public library collection.   I think it would sell well in bookstores and would be a good text for class room instruction in the short story.

There is more information on the book at the publisher's web page.

Last year I think I was the only one to blog on the Caine Prize Short Stories.    This year I am very happy there are a number of very insightful posts on these stories.    An easy way to follow the posts would be to do a search on twitter for "Caine Prize".

The awards dinner for the Caine Pize is July 11, to be held at Oxford.    If  you are interested in attending the details are on the Caine Web Page.   It sounds like a great event.

Do you still intend doing a review of the 2011 Caine Prize anthology? My friend and I have been checking every week but have not heard a word about the review anymore.

Hiya Mel U, have you given up on this project?