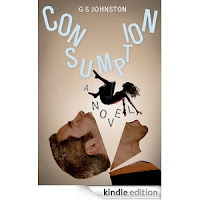 A few days ago I read a historical work of fiction set in Hong Kong in the 1940s during the Japanese occupation.    I have now been lucky enough to read a very exciting beautifully written work, Consumption:  A Novel by G. S. Johnson (Australia) set in Hong Kong and Sydney in the 1990s.     I have spent some time in Hong Kong (only about 1.5 hours away by air from us) so that draws me to books set there.

Consumption:  A Novel is a very intense plot driver work with very believable characters as its leads.   The  human interest of the story revolves around a man and a woman who as children were as close as brother and sister.    They are separated  for a long time but they eventually begin a romance.   We see the extreme difficulty of doing this especially for two such very different people as the ones we find in Consumption:  A Novel.   The male lead is an interior director to the rich and famous or infamous in Hong Kong.    The female lead has just ended a long term relationship.    The woman wants to simplify her life but the man's just keeps getting more and more twisted.

There are lots of exciting plot descriptions.   The two cities come alive for us.   The characters in this work are faced with difficult moral decisions.  Some seem to decide well, others may not win your approval.

One thing you will for sure not be reading Consumption:  A Novel  is bored.   I found it an exciting escape from the everyday world read.

I was provided a free E Book by the author.

Email ThisBlogThis!Share to TwitterShare to FacebookShare to Pinterest
Labels: Australian