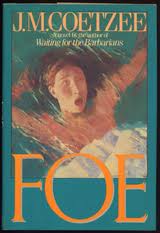 Not long ago a very kind reader of my blog in New Delhi sent me two books by J. M. Coetzee,  Foe and The Master of St Petersburg.    Coetzee (1940-from South Africa but now living in and a citizen of Australia) is a much awarded author.   He has won the Booker Prize twice as well as  the Nobel Prize in 2003.  (You can read about him here)

I decided to first read Foe as it seemed to deal with the sort of colonial matters I have been pondering of  late, it was a sort of retelling of Daniel Defoe's Robinson Crusoe (1719) from the point of view of a woman castaway and, I freely admit,  it was the shortest of the two works!

The narrative method of Foe takes a little while to become clear.   I think those who have read at least Robinson Crusoe and maybe Moll Flanders (to get some insight into how Defoe saw women and how he develops his stories) will get more from this book than those who have not.

The story here adds in a female castaway,Susan Barton, as the lead figure.   She was abandoned on the same island Crusoe was when there was a  mutiny aboard a ship she was sailing on.   It seems she was the companion, of sorts, of the captain and the crew turned against her also.    On the island we hear of her first meeting with Crusoe.    He is wild and savage in his appearance.   He has several different accounts to offer of his past and how he wound up on the island.    We also meet his slave Friday who apparently has had his tongue cut out.   This becomes sort of a symbol for the attempt by slavers to silence the enslaved.    It is  a representation of colonizing powers  and their impact on the people they conquered and ruled.   The missing tongue and the forced silence of Friday is a dominant theme of Foe.

Susan telling her story to Mr. Foe, a well known author who has "ghost written" lots of stories of adventurers, rogues, and castaways but he thinks Susan's story might have selling power as she is a female castaway and she is an independent woman who has used her sexuality to survive when she needed to.   The book should also be seen as commentary on women in the 18th century and beyond in that if a woman has no man in her life, no family fortune and is not a slave or servant than there is only one other thing she can be in the minds of most people in that world.

Susan also tells of her attempts to find her lost daughter who rumor has it is in Bahia, Brazil.    The parts of the book I enjoyed the most were the descriptions of Bahia in the 18th century.    Bahia in Brazilian culture today represents the African roots of Brazilian culture.   There is a lot of meaning packed in the use of Bahia in the novel which may depend in part on knowing that the Bahia region of Brazil (Salvador is the big city) was the intake point for African slaves (over 1/3 of slaves were sent to Brazil) most of whom ended up working in sugar plantations throughout the country. It is also considered in popular culture to be the home of the sexually most free women.   This in part is also a product of the culture of slavery in that an independent woman in Salvador was at the time assumed to have once been a concubine of a white master who freed her.    She can no longer be considered a "respectable woman" so she is quite free with herself.   (I have been to Brazil numerous times and have made some study of its history and culture.)

There is a lot of colonial "stuff"  in Foe.   It is also is about the nature of narratives, I think this is called "Metafiction".   It is about the lives of "manless" women.   One very interesting thing in Foe was the way Crusoe had built over 15 years a series of terraces (like the  rice terraces in the north of the Philippines or Java) that he cannot use himself but he is building for future residents of the island.    It seems nearly a senseless activity.

Foe is a very well written book.    I think some will find the book a bit "heavy handed" in its symbolism as if we are being beaten over the head with it at times.

Foe is not considered a top work by the author by any of the many reviewers on Goodreads.com.

I am glad I read this book.    It has some interesting symbolism.    It is an important work, I think, in post colonial fiction.

To others, I would say I would rate this book as one to read if you can borrow it or get it for free and you are interested in the subject matter.   Also, and I think this is a sound motive, a lot of people are just curious to read something by a Nobel Prize winning novelist.

What is your experience with Coetzee?

Email ThisBlogThis!Share to TwitterShare to FacebookShare to Pinterest
Labels: Coetzee

I'm glad you decided to write on this as I am planning to teach Foe in the fall for my World Lit class. I have read "The Lives of Animals" and "Disgrace" by Coetzee (along with Foe) and I think I'm about done with him. I get that he's literary and has interesting things to say about colonialism, but the masochism of his works is unappealing. His works do not understand women at all. I can't even write it off as symbolism; to me, his writing makes him sound like an a**hole. So yeah, I'll be teaching him, but I don't like his body of work.

I've only read Disgrace - did not find it easy to read either but I did want to see what it was all about. Would like to read the rest as well eventually.

I'm on it right now and all i can say it's that i love the way Coetzee present his character. At first, the character is like, what worse can happen? I'm already on an island. But later, this woman is more symbolic than anything. You're right, there are plenty of symbols dressed in a colonial form.

I've never heard of this one but I'm going to give it a try.

Disgrace. Sorry about that other spelling. I'm being too hasty on my iPad.

Life and Times of Michael K is FABULOUS!

Coetzee is a favorite. I've read 6 by him, everything is well written. I can't say I'll read this one soon as I may feel the need to read first Defoe for background info. But it's interesting that there's a side trip to Brazil in the book. I like his thoughtful exploration of colonialism.

this is the first book I've read by Coetze - I would like to read more in the future. Like your blog!