From Parliament to Trash Picker
A Descent into Madness? 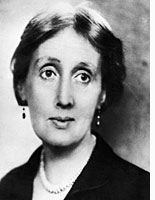 One of my long term reading projects centers on reading the complete fiction of Virginia Woolf (1882 to 1941-UK-there is some background information on her in my prior posts).    I have read and posted on seven of her novels and a few of her essays and short stories.    Sometimes the short stories of Woolf seem to be neglected.   Maybe that is because of the towering status of her four most important novels.   To me the short stories can be sort of seen as a "training ground" to read The Wave, Mrs Dalloway, Orlando  and The Lighthouse.   I know not everyone likes short stories (an attitude I shared about 1.5 years ago) but I have found her stories to be pure delights.

"Solid Objects" is a total gem, a perfect example of a world compressed into a few pages.    I am basically doing this post to urge those who are into Woolf to read this story as soon as they can.    I liked it so much I read it three times.   One time for a first impression, a second time to savor it again and be sure I understood it and a final time just for sheer pleasure.

As the story opens two upper class males are at the beach.   John is a member of Parliament and a candidate for an important party office.    Charles is his close confidante and good friend.     John sees a shiny piece of glass and picks it up.   In his mind he wonders how it got on the beach.   Is it from a treasure chest that has been on the ocean floor for years?   He picks it up and, to the bewilderment of his friend, takes it home and puts it on his mantel as a treasure.

A huge change begins to overtake John as he develops an obsession.

"John found himself attracted to the windows of curiosity shops when he was out walking, merely because he saw something which reminded him of the lump of glass. Anything, so long as it was an object of some kind, more or less round, perhaps with a dying flame deep sunk in its mass, anything — china, glass, amber, rock, marble — even the smooth oval egg of a prehistoric bird would do. He took, also, to keeping his eyes upon the ground, especially in the neighbourhood of waste land where the household refuse is thrown away. Such objects often occurred there — thrown away, of no use to anybody, shapeless, discarded. In a few months he had collected four or five specimens that took their place upon the mantelpiece."

One day on the way to an important meeting at Parliament John spots a very unusual piece of colored glass in the trash.   He cannot reach it so he forgets the meeting and returns home to fashion a special took for picking up items like this.    John becomes totally consumed by his search for great found objects.     A once distinguished member of Parliament basically becomes a trash scavenger.

"He now began to haunt the places which are most prolific of broken china, such as pieces of waste land between railway lines, sites of demolished houses, and commons in the neighbourhood of London."

He begins to neglect his duties and he is not reelected to Parliament.     When his friend Charles goes to visit him to console him for his defeat John seems barely concerned at all and wants instead to show off his newest finds.

John gets more and more into his new pursuit.   He begins to dig through garbage dumps with his special stick and a bag to place his treasures in.   People begin to pretty much forget about him.

"Day after day passed. He was no longer young. His career — that is his political career — was a thing of the past. People gave up visiting him. He was too silent to be worth asking to dinner. He never talked to anyone about his serious ambitions; their lack of understanding was apparent in their behaviour."

In a very brilliant closing scene Charles asks John why he has given up.   John tells him  he has not given up at all.    Each man is talking about something very different.    John means to the horror of Charles that he has only just begun his life work of looking for treasures only he can understand in the trash of London.

I have told much of the plot of this story, I know.   I do not regret it as the wonder of it is not so much in the very clever plot but in how subtly John's descent into madness is portrayed.   Or maybe it is his escape from Madness or a move from one obsession to another.

This is a very good short story I endorse totally.   I think it may have something important to say about the meaning and import of Virginia Woolf.

Do you have a favorite Woolf short story?   Please share your experience with us

I've yet to fully engross myself in the oeuvre of Woolf . I have read several of her short stories and yes they are " pure delights" ( as was "Solid Objects" ).

I have never read anything by Woolf, though I have Mrs. Dalloway in my bedside table. Thanks for the link.

I will be sure to visit this link. It does sound like a great story. Will it be as good as The New Dress?

theeclecticreader-try one of the short stories, maybe

I just bookmarked it and will read it later today. I love Virginia Woolf.

I just read this short story. It's...intriguing. The whole time I kept thinking, 'what is she trying to say?' I conclude that obsession, excluding all else, can lose you everything? Or, if you desire something it should be to the exclusion of everything else? At the end, I doubt John cared that Charles never came back, just as he never cared that he lost his position in Parliament. It's interesting...

Btw, this is my first Woolf! I'll be reading Mrs Dalloway next month. Am now looking forward to it!:D

Thanks for this. Haven't read this story, but I love VW. I have a short story collection, and I've written about a couple but this one isn't in it.

Yes, this is something huge I have even used in class with my students. As a matter of fact, Woolf´s short stories are my favorite when compared to her novels. It´s a personal stance. Another one to surely give it a go is THE MARK ON THE WALL. Simply enthralling!!