An Enjoyable Story from a Leading
Author from Bangladesh 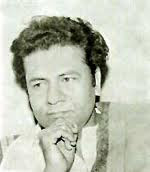 
Posts on the Literature of Bangladesh

Before the 1947 partition of India and the subsequent 1971 War for The Independence of Bangladesh there was no such thing as Bangladeshi literature.   Works written in Dhaka were part of the venerable Bengali literary tradition.    The terrible events of history have helped to create a separate cultural tradition for writers from Bangladesh to draw on and at same time to help create by their work.

Saramash Basu (924 to 1988-Dhaka, Bangladesh) wrote over 200 novels and is credited with 100 longer works of fiction.    Prior to becoming a  full time writer in  1950 he worked for several years in an arms factory and also sold eggs as a street hawker.   In 1 949 he was placed in jail for a year as a member of the communist party, illegal at the time.     He was fascinated since youth by folk tales.   Unlike most of the other South Asian authors I have posted on, he was not born into a life of privilege.

"Befriending the Wild Elephant" centers on a young boy, maybe 15 or so, whose father wants to take him into a jungle preserve area that will allow them the opportunity to observe lots of wild animals, including if they are lucky, wild elephants.   I have learned recently that stories like this were very appealing to the very urbanized readers of South Asia longing for simpler days.

As the story opens the father and son pass on a bus through places hurt badly by war and see lots of soldiers.    They see elephants tied up in the military camps where they are used kind of like living bulldozers!    They were on their way to a resort in the Darjeeling region, known for its great natural beauty and vast tea plantations.   In an interesting note, the boy's name is "Gogol".    The story is short and easy to read.   It really gets to be fun when the boy meets and becomes friends with a wild elephant (that speaks to him).    There is an exciting moment when  a wild elephant with the boy on his back charges a group of tame elephants.

"Befriending the Wild Elephant" by Sarmaresh Basu (translated by Atreyee Gusta) is a simple, well done half parable story that is sort of typical as a nostalgia for the past of South Asia story.

You can read it HERE.    It is a fun story worth your time.