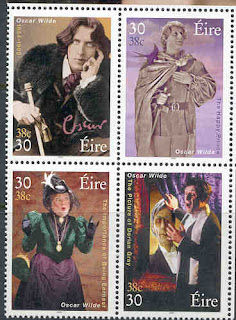 "Dandyism is the assertion of the absolute modernity of Beauty"

Oscar Wilde on The Reading Life

I read the comedies of Oscar Wilde (1854 to 1900-Ireland) and Portrait of Dorian Gray a long time ago.   I remember thinking how marvelous it would be if people actually spoke in the wonderful way Wilde made them.   Maybe I would not have that as my first reaction now but I think it is the common one when one first reads Wilde at a young age.

I was moved to reread him (both plays can be found on Dailylit.com) by my rereading of Susan Sontag's 1965 essay "Notes on Camp" which I read in conjunction with my first reading of Ubo Roi by Alfred Jarry.    Sontag dedicated her notes to Oscar Wilde and quotes him several times.   (I think some of the literary judgments of Sontag are not correct but I think her discussion of differing literary sensibilities is very interesting.    She credits Wilde with helping to popularize  Camp but she does not say Wilde should be seen as a pure Camp figure.     I use the expression "Camp" not as meaning "so bad it is good" but in the terms set out by Sontag.)

When The Importance of Being Earnest and Lady Windemere's Fan were first produced the plot lines seemed scandalous to many.   The Importance of Being Earnest centers on a man with a double life.   In the country he is serious John for the  but in the city he becomes Ernest a devilish man about town.    When his double life is found out by his friend Algernon he in turn confesses he also has an other identity. A tale of martial deception and romantic duplicity ensues.    The real point of this play is in some of the things said in the conversations in the play.   Oscar loved to outrage!

Lady Windemere's Fan is more directly about infidelity and deception within the late Victorian marriage.    It is still read and preformed for the wonderful dialogue.

The plot lines of Wilde's plays probably no longer have the ability to shock audiences.  (We hear much worse stuff about people in high places on the news all the time.)    I think his dialogue will still delight a lot of readers and theater goers.

"A Few Maxims" seems a bit forced at times.   Wilde is trying a bit hard to inflame his readers but they are still very much worth reading.

Those whom the gods love grow young".

To Wilde neophytes, first by far read The Portrait of Dorian Gray, then some of his short stories and fairy tales and then The Importance of Being Earnest".

Thanks for this!
I think that we forget that he did so much more than "just" Dorian Grey. :-)

I adore Wilde's comedies. Importance of Being Earnest is actually my favorite.