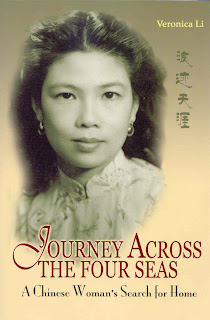 Journey Across the Four Seas - A Chinese Woman's Search for Home by Veronica Li (2007, 298 pages)

Journey Across the Four Seas - A Chinese Woman's Search for Home by Veronica Li is a wonderfully done look at the life of the author's mother, Flora Li.   The story opens a few weeks before the Japanese attack Pearl Harbor and declare war on the USA and on England.    Flora Li was living in the British Crown Colony of Hong Kong (1941) when war broke out and there were immediate rumors of a Japanese invasion of Hong Kong.    The citizens knew of the horrible way the Japanese had treated the citizens of Nanking,  China killing 100,000s of thousands of unarmed soldiers and civilians.   They also made rape a terror tactic of the war.   They knew Hong Kong had no army ready to defend it and they would be captured.

Veronica Li does a wonderful job of recreating the atmosphere of Hong Kong in 1941.   Her mother was a student at Hong Kong University and did not really have a care in the world.    Flora Li had light skin, a very attractive feature, and was considered quite pretty.    Once this was a great source of joy and pride to her family.   Now her female relatives rub soy sauce all over her face and arms to make her appear darker and ugly in the hopes she could avoid being raped or sent to a Japanese  Army brothel.    In time she realizes she needs to escape Hong Kong for the parts of China that are not controlled by the Japanese.     As the story progresses I saw how much connections, family first then school and regional ties determined to a large extent who survived and who did not, who prospered, and who married who.

This is not an all dark book.   I really enjoyed seeing Flora's joy in finding her old co-students and fellow Cantonese in a remote part of China.   With the help of some new and old friends she starts school.    We learn of her first crush, a tall handsome young man destined for the military.   The romance does not endure and Flora Li moves on a wiser young woman.   She will always, I think, kind of pine for the one that got away (but that is just because she never married him-if she had there would have been other issues).

There is a lot in Journey Across the Four Seas - A Chinese Woman's Search for Home.    We see life inside the household of an affluent business man's house.    We get to travel to Bangkok with the now married and pregnant Flora Li after the war.    She made what seems on the surface to be a good marriage (to a body builder-it was interesting to learn about body building magazines and contests in China in the 1950s or so).    I learned of the great reverence in which Chiang Kai-Shek and his wife were held and  I felt a real sense of impending disaster.   I saw the great regard in which Chinese of the time held The USA and most dreamed of immigrating there.   In many cases the husband would go first and sometimes live there alone for years sending all he can back home.

The book showed me a lot about the life of women and girls in China in the 1940s and beyond.    Boys were very much favored by parents, in a way that in fact in many cases ended up making them weaker than they could have been as men.   Girls were some how raised to be tougher than boys even though they were expected to embody total femininity.   There is a lot wisdom and social history compressed in these beautifully written lines:

"A daughter has another advantage—access to information. While my brothers walked around in a fog, I always had an older woman to light my way. Sometimes she was Mother, other times she was Sam-Koo or some other mahjong auntie. One of them would warn me of the hazards ahead. My brothers, however, had no idea of the disasters that hit them, either before or after. The unique position I had as the only daughter would greatly influence the next stage of my life".


There is a lot more in this book than I have conveyed.   I think anyone interested in 20th century Chinese history would really enjoy it.   It is a very positive uplifting book I greatly enjoyed.

When I received an E mail from Veronica Li asking me if I would be interested in reviewing her book I was of course interested.   (Everyone likes to have their opinion sought.)   Lately I have been swamped with requests for reviews so I have to be selective.   I decided I wanted to read her book because I am very interested in WWII in Asia and for a personal reason.   A branch of my family has their ancestral home (going back 100s of years) in Northern  Luzon in the Philippines quite near the infamous Batan Death Camp.    How residents were treated in the Philippines was in part a matter of the temperment of the local Japanese milirary governor.    All were very harsh.    Some areas were ruled in a business like way, others in a savage brutal fashion.   Northern Luzon was one of the worst areas to live in under the Japanese.   A few members of our family (80+) still remember those years but as is perfectly normal the younger people have no time for their stories.

I commend Veronica Li for having written such a wise and beautiful tribute to her mother.

You can learn more about Veronica Li (and how to buy her books) at her webpage.

Here is part of her description of her career:


"After obtaining my master's degree in International Affairs, I went to work for the Congressional Quarterly. Six months later, the World Bank hired me as a “Young Professional,” the title for a management-track recruit. At the time, China had just become a member of the World Bank. My Chinese proficiency was an advantage.
For six years, I traveled to my home territory, East Asia, to assess Bank-financed projects. In a spurt of adventurousness, I transferred to East Africa, specifically to work on Somalia. The excitement that awaited me went far beyond my expectations. I watched the country explode into civil war, some say despite western aid, others say because of it. The Somali tragedy moved me deeply, and I began searching for answers."

I endorse this book without reservation and will, I hope, soon read her book based on her time in Somali.

This book is available via a Kindle edition also.

This sounds like an utterly fascinating account of a time period about which I know very little...

On a different note, I thought of you last week when reading a collection of short stories by Eric-Emmanuel Schmitt, a writer in Belgium. Have you ever run across his stories in all of your short story reading? I think he's quite marvelous.

As the Crowe Flies and Reads-I have not yet heard of Eric-Emmanuel Schmitt-I checked him on line-he sounds very interesting-If I can find a place to read him on line I will for sure do so-I checked my blog stats and was shocked to see you are still on vacation!-thanks so much for stopping in from what looks like paradise

Thanks for an insightful review of my book. As you pointed out, my mom's life is a reflection of 20th century Chinese history. The role of Chinese women went through a revolutionary change during that time. They were liberated from the terrible practice of footbinding. Life was still tough for them, but they worked hard and paved the way for their daughters. They've shown that a woman's place isn't just in the home. It's also in history!