The Start of French Surrealism
Was Susan Sontag Right about  Alfred Jarry? 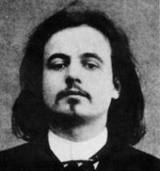 When I saw that Amateur Reading of Wuthering Expectations and Nicole of Bibliographing  were going to jointly host a reading event centered on Alfred Jarry my first thought was "Yes, I will join in" and  my second thought was "Who is Alfred Jarry?"     There is some very good background information on Jarry on the challenge web pages.   Basically he was one of the founders or pre-founders of Surrealism in the French Theater.    About the time I was preparing to read the very first of the "Ubu" plays, Ubu Roi   (King Ubu or Ubu the King) I happened to reread Susan Sontag's very famous and influential essay about sensibilities, "Notes on Camp"    In this essay she famously said there were three major sensibilities.    The first was that of "high culture" meaning:


"The Iliad, Aristophanes' plays, The Art of the Fugue, Middlemarch, the paintings of Rembrandt, Chartres, the poetry of Donne,The Divine Comedy, Beethoven's quartets, and - among people - Socrates, Jesus, St. Francis, Napoleon, Savonarola. In short, the pantheon of high culture: truth, beauty, and seriousness."


The another sensibility (which she is more or less defining in her series of remarks) is that of Camp in which objects and things are valued for their aesthetic qualities.   There is a lot in her essay about the nature of Camp:


"The hallmark of Camp is the spirit of extravagance. Camp is a woman walking around in a dress made of three million feathers....

26. Camp is art that proposes itself seriously, but cannot be taken altogether seriously because it is "too much." Titus Andronicus and Strange Interlude are almost Camp, or could be played as Camp. The public manner and rhetoric of de Gaulle, often, are pure Camp.

27. A work can come close to Camp, but not make it, because it succeeds. Eisenstein's films are seldom Camp because, despite all exaggeration, they do succeed (dramatically) without surplus. If they were a little more "off," they could be great Camp - particularly Ivan the Terrible I & II. The same for Blake's drawings and paintings, weird and mannered as they are. They aren't Camp; though Art Nouveau, influenced by Blake, is."

Hmm before we say  Ubu Roi might be Camp Sontag says no it is not. Although  one could certainly see a woman in a dress made of three millions feathers poughassing on stage in Ubu Roi, the work of Jarry seems to take itself seriously (not real sure of this but it was taken very seriously when it was first preformed).


The meaning of "Camp" as used by Sontag is very carefully explained and exampled.    I think perhaps Jarry does not fit because Camp is not meant or does not have the potential to "hurt", it is somehow meant to be light.   This does not mean it cannot be great super- refined art of the highest quality.  Ubu Roi cannot also be described as in any way capable of inducing feelings of rapture over its beauty.      It is also not in anyway over refined and maybe it does intend to offend and is like a large semi-private joke.   Or maybe it is sort of a "bright school boy joke" directed at  daddy and the headmaster?

"For instance, there is the kind of seriousness whose trademark is anguish, cruelty, derangement. . Think of Bosch, Sade, Rimbaud, Jarry, Kafka, Artaud, think of most of the important works of art of the 20th century, that is, art whose goal is not that of creating harmonies but of overstraining the medium and introducing more and more violent, and unresolvable, subject-matter. . . . Clearly, different standards apply here than to traditional high culture. Something is good not because it is achieved, but because another kind of truth about the human situation, another experience of what it is to be human - in short, another valid sensibility -- is being revealed."

As I began to read Ubu Roi I had some idea of what to expect from Jarry(1873 to 1907-France-there is a good background article on him HERE).  In the first few acts we meet Mama and Papa Roi, who seems to be European power figures (royalty) of some sort.    They conduct themselves in the most barbaric fashion.   I admit it took a few scenes for Ubu Roi to draw me in.   I loved it when Papa Roi began throwing lots of  court and government figures into the "debraining" machine.    He also seems to either invade or control Poland and gets into a war with the Russians also.   Hmm could this be a recounting of the wars of Napoleon?    Is Papa Roi Napoleon or is he any authority figure?   Is Jarry telling us that authority, government power, kingship, and the rule of laws are really just things imposed on us under the cover of propriety, religion or natural law by who ever the most powerful mad man of the moment might be?    Why does Papa Roi think the people he rules love him?    I think it is because he knows they hate the functionaries below the king much more than the king and they love the arbitrary cruelty he brings into the lives of these people, they accept their own misery because they can enjoy seeing their betters destroyed by King Roi.     Is Ubu Roi a Mad Magazine remake of a Theban play?   Is Ubu Roi Cronus (Kronus)?    Here it is I thought trying to recall some lines from W. B. Yeats:

The darkness drops again; but now I know
That twenty centuries of stony sleep
Were vexed to nightmare by a rocking cradle,
And what rough beast, its hour come round at last,
Slouches towards Bethlehem to be born?


I think the horrified people in the theaters when Ubu Roi was first performed thought he was the "rough beast".    I think the sensibility exemplified by Jarry in Sontag's essay as that whose  "trademark is anguish, cruelty, derangement" is at least as old as that of high culture.    Is Jarry showing us that High Culture needs the permission of this other sensibility to exist?   Or is it just a skirmish in a very old battle?


Ubu Roi was a lot of fun to read.   For sure I can see he is a big influence on Bolano and much of contemporary Japanese literature.    Maybe there had to be a Jarry in order for there to be a Beckett.


I thank Amateur Reader and Nicole for allowing me to discover another wonderful totally new to me author.     One thing I have learned about the reading life is the more you think you have learned the greater your feeling of ignorance should be.   This might be one of the themes of Jarry also.   I will, I hope, read more of his work.


"Notes on Camp" by Susan Sontag can be read HERE.    I am not aware of anywhere online where the full text of Ubu Roi can be read in English.

a Mad Magazine remake of a Theban play?

Now that is just about right!

And you're right that parts of the play are some mix, not necessarily coherent, of the French Revolution and the Terror, Napoleon's ascent, the invasion and retreat from Russia, and who knows what else.

Can you believe that Yeats was actually in the audience for that famous first performance if Ubu Roi? How unlikely.

On a side note, Susan Sontag associates Aristophanes with truth, beauty, and seriousness? Perhaps her essay is itself an example of Camp.

Don't understand a thing that this guy Jarry has written, from what I've read in your blog posts, but I can verify this statement of yours: "One thing I have learned about the reading life is the more you think you have learned the greater your feeling of ignorance should be." This is so very true! I'm beginning my twenty-sixth year of teaching, but the longer I teach the more it is I discover I need to know. Or, improve. Or, change. So, I liked that part of your post the best. :)

Thanks for linking to the Sontag essay. Many ideas to ponder. And Yeats's "rough beast" fits well. Ubu is indeed anarchy loosed upon the world.

Haha, I approve of this! And glad you did join in even after that second question.

Very interesting post matching Jarry up with Sontag's three categories of art. I think we can also say that Jarry falls outside the realm of the purest Camp, for Sontag at least, because its aesthetic is not naive. Her statements that "Camp rests on innocence" and suchlike really brings it home that Jarry must be in this other category, full of "overstraining the medium and introducing more and more violent, and unresolvable, subject-matter."

Amateur Reader-fascinating to learn that Yeats was in the audience for the premier-I can see Yeats taking it as a personal affront!

Bellezza-glad you concur on my remarks on the reading life

Rise-thanks so much for your comments

Nicole-I see no reason pure ignorance should stop me from posting on Jarry!!-I have been thinking about Camp and Sontag's essay-we should ponder a read along of a pure camp writer (one that can be read online)thanks for your comments