"The Prophet's Hair" by Salman Rusdie 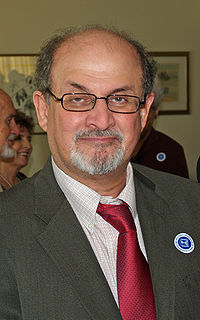 "The Prophet's Hair" is the first short story by Salman Rushdie that I have read.  It is one of the most interesting and exciting stories I have read in a while.   I have previously read and posted on two of Rusdie's (1947, Bombay) novels Midnight's Children and The Enchantress of Florence.    Rushdie has received most of the top literary awards short of The Nobel Prize.   He has become very well known outside of the literary world because of the reaction that his Satanic Verses produced.


I love both of these books.   Here is what I said about the prose of Rushdie in The Enchantress of Florence.


As I read this work, at times I marveled at the fireworks of the language.   At times I was really quite amazed.    It is hard to find something easily comparable.   Yes at times I did find it almost too lush and rich.   Imagine a 25 layer cake made by 25 of the best Parisian pastry chefs with each layer a different flavor made with no expense spared and you get some of the idea of it.    Now imagine as you eat the cake you notice small round balls of something mixed in.   Maybe it is opium maybe it is goat waste or even a poison that will produce a spectacular disease that everybody else in the court will marvel at as it overtakes you.    Maybe even it is a magic potion that will transform you in ways beyond imagination.

The "The Prophet's Hair"  is set sometime in the last century in Srinagar, in Kashmir.   It is told sort of in the style of an Aladdin's tale.   The central characters are a wealthy money lender indifferent to the laws of his  Islamic faith, his son, his daughter who adopts modern ways to his chagrin, and his long suffering wife.   The man is totally preoccupied with business.   As the story opens his son, a pampered obviously rich young man, is venturing into the roughest part of the city, looking for a great thief.   He is led into a terrible area and mugged.   I do not want to say why as that would spoil too much of the plot.   Something happens in the father's life that causes him to become extremely devout and conservative in his observation of religious life.   He disowns his daughter for going in public without a veil.   He begins to treat the customer of his business in a terrible harsh way, as he never did before.     For the first time ever he hits his wife.    I really do not want to tell more of the plot of this story.

The fun of this story, and fun is the first word I would use to describe it, is in the contrasts of the lives of the wealthy family and those in the thieves quarter and in just the pleasure in the wondrous prose style of Rusdie.

This story first appeared in The Guardian in 1981.   I read it in The Penguin Book of Modern British Short Stories.


I am considering purchasing a Kindle edition of Satanic Verse and I would appreciate input from all who have read it.

Mel, I haven't read "The Prophet's Hair" or "The Enchantress of Florence" but I have read the unputdownable "Midnight's Children" that left me hanging on to every word from his pen. As you said, "Fireworks of the language."

I tend to think of his novels when I think of Salman Rushdie. I've loved his writing in the past and the little hints you gave us in your post have interested me, so I hope to check out his short stories in the future.

Prashant C. Trikannad-Do you have a favorite Rushdie work?