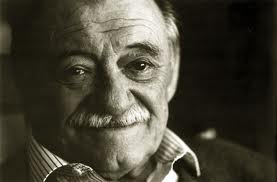 
I was very happy to get notified that Miette of Miette's bedtime story podcast has posted two more stories on her marvelous  web page.   I said it before and I will say it again, Miette's bedtime podcast is the only source of literary podcasts (the reading aloud of a literary work) endorsed by The Reading Life.   I find her voice and sometimes wonderfully eccentric style mesmerising and her taste is impeccable.   She has been doing this for seven years and I think you will be amazed by her collection of podcasts.

One of her new selections was "The Night of the Ugly Ones" by Mario Benedetti  (1920 to 2009-Uruguay)    I admit freely I have never heard of Benedetti , and unless you are from Uruguay you may not have either, so I, of course, Googled him.   It turns out he is is a well known Uruguayan poet, journalist, and writer of fiction.   He is evidently famous in Latin American literary circles but is little translated out of Spanish.   The only other author from Uruguay I have read is Horacio Quiroga, often called the Edgar Allan Poe of the Amazon.  (Miete also has a podcast of one of his stories on her web page.)  I loved the five short stories I read by Quiroga and they are all in fact rather scary.    Of course there is no reason to assume that Mario's story would be in a similar mode just because he is also from Uruguay but it is also a story about a dark side of life that most people would not even want to think about.   If anything it is darker in its way than either Poe or Quiroga!

Have you ever been out late at night in a big city, big enough so nobody knows anybody else?  No questions asked about what you were doing that night.    You  see the people in "The Night of the Ugly Ones" but you turn away, or at least I did, I admit,  people so ugly and misshapen either by birth or horrible accident that it hurts to see the common humanity in them.  This story is about very touching, real, and passionate romance between a man and a woman from among "The  Ugly Ones".

One of the "uses" of literature is it lets us or if well done and we open ourselves to it, forces us, to see the humanity in people very other from ourselves.   If this story has a moral, it is an old one, "There but for the Grace of God, go I".

This story is for sure worth the ten minutes it takes to listen to.   While you are on Miette's bedtime podcasts, do yourself a favor and look around!

this sounds really interesting, thanks for the heads up.