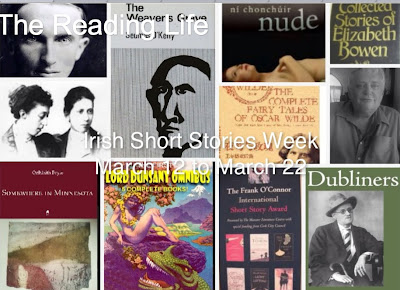 All of the Irish Women Authors listed on Wikipedia

Irish Short Story Week, always set around St. Patrick's Day (March 17 this year) will be from March 12 to March 22.   Last year a total of about 60 different stories were posted on by people from all over the world.


Writers of Irish short stories pretty much have set the tone for much of the cultural and literary trends of the last 100 years.   Bram Stroker and Joseph Sheridan La Fanu basically started the vampire craze that is still going strong all over the movies and TV now as well as in books.   Oscar Wilde helped create a new sensibility, that of camp, that has opened up an entire new way of looking at the world.    Among Irish short story writers are James Joyce, most important 20th century and beyond novelist, Samuel Beckett the most important 20th century playwright, and William Butler Yeats, for sure the greatest poet of the Twentieth century and for me one of the very greatest of all times.    Stepping down from Mount Parnasssus, we have wonderful writers like my literary love, Elizabeth Bowen to represent the Anglo-Irish.   Joseph Sheridan Le Fanu is considered among the very best writers of Ghost and Fairy stories.   Not bad for a country just a little bit bigger than the American state of West Virginia and less than one percent the size of Australia.

Here are my tentative plans for the ten day week

Day 10-Open-may expand this to American and Australian writers from the second generation.

I want to join you and may even choose one of your authors and post on the same day but not sure when yet.
A great list in any case.

Ooh, some of my favorite authors in that mix. Will try to join you sometime that week--it has been a while since I read any short stories...Also, I am most sorry for the loss of Mr. C. It is so difficult to lose a beloved furry member of the family, especially one who has been there for so much.

Is it time for this challenge already?! I'll probably participate at a low level--one short story--if that's an option. Last year, I enjoyed reading The Journey by Edna O'Brien.

Hi Mel, will attempt a story or so & some poetry also, thanks

Caroline. It will be great to have you join in

Ds. I hope you can join us. I am having hard time coping with loss of Mr. C

Suko. Hope you can join us

Parrish Lantern. Would be great if you joined in

Hi Mel: I'm all in. I have The Complete Works of Oscar Wilde. Plus I want to read Dubliners. I will also look in the several anthologies that I have.

I'm yet to edit the Africa Challenge Post. I apologize. Life's been hectic. But I will do so this weekend, promise, so that you can participate fully.

I'll be taking part. I haven't completely settled my choices yet, but I know there are some fairy tales involved, so I'll try to time those to coincide with your focus on those too! Looking forward to it!

Buried In Print-great to have you joining in -Oscar Wilde wrote a number of good fairy tales as did Joseph Sheridan La Fanu, among others

I'm going to try to read "The Dead" by James Joyce in March. Thanks for hosting! :)

Jillian-great pick and so glad you will be joining

Cool! I heard about this from Caroline at Beauty is a Sleeping Cat. I'm looking into a short story by Bram Stoker but I haven't decided on which one yet. Thanks for hosting!

so excited!!! thanks for the reminder and the lovely compliment...i think i'll do all women this week...don't know what i'll do next.