Please consider joining us for Irish Short Story Week Year Two, March 12 to March 22.   All you need do is post on one short story by an Irish author and send me a comment or and e mail and I will include it in the master post at the end of the challenge 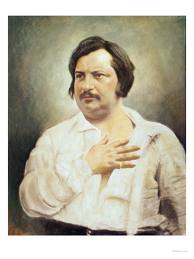 Honore de Balzac (1799 to 1850, France) was a veritable writing factory.    He is one of the highest regarded of French writers of the 19th century, perhaps second to Victor Hugo.   In A Life Time Reading Plan Clifton Fadiman lists two works by Balzac, Pere Goriot and Eugene Grandet.  He says he thinks one of the reasons Balzac is not read more than he is (written in 1960) is that it is very hard to know where to start among the literally hundreds of novels that might be by Balzac (he hired helpers to write for him) and also he no works that are considered dominant masterworks.

Cousin Bettiie is set in Paris in the 1840s.   The plot centers on the attempt of one of the female members of an extended family to destroy everyone else.   It is really about money.   I did not count the references to Francs but it seems at least every other page had a reference to the cost of something or how much money someone had as their annual income.

Bette (Betty in some translations) use her more attractive female friend to seduce and ruin several member of her family.   The female characters in the novel are either very virtious or very nasty and vindictive.

The men in the novels are mostly slaves to their own sexual desires and to their easily preyed upon vanity.

Cousin Bette paints a vivid very detailed and realistic portrait of Parisian society.   Bette is often described using animal imagery and my post read research indicates her name is French slang for "Breast"    Marriage is pretty close to a form of prostitution in the world of this novel.   There maybe some elements of sexual attraction between the women in the novel.


There are also political themes in the novel.   Balzac  favored the return of the Bourbons to the throne and greatly admired Napoleon.   The moral decay portrayed the novel is partially to be seen as the result of what Balzac sees as the decay of old values and a falling away from strict Catholicism.


Cousin Bette is a an important work for anyone into the 19th century novel.   The plot kept my attention.   I would not judge it to be a light or casual read but it is a must for those with a serious interest in French culture and stands up in comparison, in my opinion, to the second rank of the works of the major 19th century English novelists writing about society, class, men and women, and money.


I downloaded this work from Manybooks.

Please share your experiences with Balzac.   If one were going to read only one or two of his works, what would you suggest?

Words and Peace does a very interesting meme every Thursday, I Love France, where we are asked to leave notes of our posts on anything related to France and this will be my contribution for this week

I'd first recommend _Pere Goriot_ or _Old Man Goriot_ or _Father Goriot_. I've seen all three titles. It's a must read.

A second title: Why not _Cousin Pons_, as a bookend with _Cousin Bette_

Fred-thanks very much for these suggestions-

This book has seems to encompass many themes--excellent review, Mel!

Thanks for the shout out. I'm not posting every week, alas, but I always attach sync the picture in the right menu to the latest post, so that it's always available and the latest version.
I also use manybooks form time to time, great resources in many languages