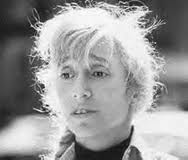 Reneta Adler was born in Milan Italy in 1938.   Her parents fled Europe to escape the Nazis and she grew up in Danbury Connecticut.    She attended Ivy League schools and  the Sorbonne in Paris where she studies Linguistics and Structuralism.   She also graduated from Yale Law School.  She worked as a staff writer for The New Yorker for a  number of years.    She has written several highly regarded novels.   Her short story "Brownstone" won the 1978 O Henry Award for best short story by an American.

I read "Brownstone" in A Wonderful Town:   New York Stories from the New Yorker and enjoyed it a lot.   For those not from New York City, a brownstone is a row house constructed from  brownstone, often a multistory building building.   The story is told in the first person by a woman living in the building.   It is kind of a running commentary on her life and the lives of her neighbors and her observations on the neighbors.   It is very much a New York City slice of life in the big city story.   I enjoyed reading it a lot.    I would read another short story by Adler but probably will not seek out her longer fiction at this time.   Just too much else out there.

Please share your experience with Adler with us.   Reading suggestions are always greatly appreciated.

I have read short stories by Graham Greene but not "The Invisible Japanese Gentlemen". I'll check it out along with stories by Emma Tennant and Reneta Adler, neither of whom I've read. Thanks for writing about these authors. They are new to me, as so many are since I've been visiting your blog.

Mel, I left a response to your comment over at my blog and I'm taking the liberty of placing it here: I discovered Lang's book at manybooks.net which, if I'm not mistaken, you introduced me to. It is an amazing site. You're right about the Spotlight on the homepage. You get to see two new covers about two unrelated topics each time you "refresh" the page. I think it's one of the best free eBooks sites.