Death In Venice by Thomas Mann 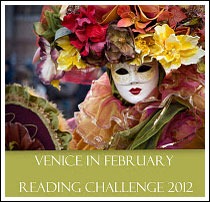 Last year I read and was totally overwhelmed by the power and depth behind Thomas Mann's (1875 to 1955-Germany) The Magic Mountain.   It as if all of European culture were almost summed up in one work.    When I saw Ally from Snow Feathers and Dolce Bellezza were jointly hosting an event this month, February in Venice,  in which participants are asked to read books about or set in Venice I knew at once I wanted to read Death in Venice this month. 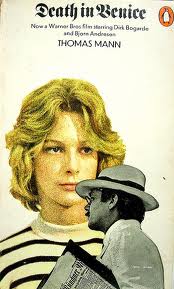 Gustav von Aschenbach is a man of extreme refinement totally dedicated to his art.    He is held in the highest esteem in German cultural circles.   On the boat trip to Venice the author is somehow repulsed by a man about his age with a party of much younger man who is trying to act as if he were young.   I got the feeling this was an allusion to the other man being gay and this revolted Aschenbach.    Of course those most revolted by a life style other than their own are often acting out of fear of their own hidden impulses.

The author begins to follow the young man and his family all over Venice so he can see the boy.   He finds it necessary to speak of his fixation on the boy through the filter of the views on beauty expressed in Plato's Phaderus.   There are some very interesting comments on theories in the dialogue and I think I will have to reread this dialogue soon (it has been decades since I read any Plato).

I do not wish to tell more of the plot.    There are big themes, as one would expect, in this work.   The question as to whether or not Aschebach is a latent homosexual pedophile is central to the book.

I would endorse this book to anyone who likes a novel of ideas.   If you do not like works in which characters reflect in a fairly high level fashion on abstruse philosophical issues then Death in Venice might not work for you.    I really enjoyed this work a lot.   I must say I thought the ending was really brilliant and deeply ironic.   I think this book would repay well repeated readings.   Venice is beautifully described in many passages of Death in Venice.

Please share your experience with a Thomas Mann with us.

Always wanted to have a read about Death in Venice. Glad you like it and all the more reason to read it. Cheers.

Jov. I think based on your posts that you might like it alot. Hope you are well

Mel, it's been a while since I read this but I remember both liking it and disliking it at the same time. I'll have to revisit it to remember why, though.

My experience, though...well, I'll link to this post for one of the eeriest book moments I've ever had.

Sounds like one I'll skip, even though it does seem perfect for Venice in February. I generally tend toward lighter books.

I will check out Thomas Mann. He has been recommended several times over. What I did for Venice in February is The Aspern Papers by Henry James, which I really enjoyed. I already made my post on it (so I hope you could drop by and let me know your thoughts). Have you read it? I learned from your latest post that you are reading a story by Henry James.