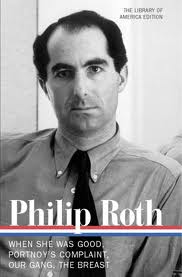 Philip Roth (1933, Newark, New Jersey, USA) is a very prolific much awarded writer with over thirty novels published plus numerous short stories and essays.   He has won two very prestigious American literary awards, The National Book Award and The Pulitzer Price.   The last work I read by him was way back when the novel that made him famous Portnoy's Complaint was first published to public outcry for its explicit account, told through  a monologue, of the sex life of a Jewish bachelor obsessed with his mother.


Roth also wrote several novels, loosely autobiographical, centering on a novelist, Nathan Zuckerman.     "Smart Money" is  a short story based on this same novelist (0r perhaps it is a prior topublication extract from a novel).


"Smart Money" is a very interesting, entertaining story that held my attention throughout.    As the story opens in New York City where he now lives, Zuckerman has just published a hugely popular best seller based on the life of Jewish people in New York City.   Most people love it but there are a vocal majority who feel his sexually explicit novel shames the people it depicts as well as their heritage.


Zuckerman likes to go out and about in New City but where ever he goes now people recognize him and approach him.     People want to thank him for his book and tell him what it means to them.    There is one other major character in the story.   It is a man who was involved in the infamous quiz show scandals in which contestants were given the answers in advance.   The man in the story lost to another contestant who was given the answers.   This was a long time ago but he has been an embittered and obsessed with telling his story ever since then.   He more or less traps Zuckerman into a long and hilarious conversation which is really just his monologue.


This story is included in Wonderful Town:  New York Stories from the New Yorker (2007)


Please share your experience with Philip Roth with us.

Email ThisBlogThis!Share to TwitterShare to FacebookShare to Pinterest
Labels: Philip Roth, US

I've only read two of his novels - The Plot Against America and The Human Stain. I enjoyed Plot (though the ending was wrapped up too quickly and forced IMO)...and thought Stain was sorta meh.

I haven't read any of his novels. Thanks for posting.
Ann