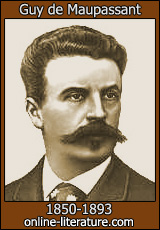 Words and Peace does a very interesting meme every Thursday, I Love France, where we are asked to leave notes of our posts on anything related to France.     I am currently reading The Complete Short Stories of Guy de Maupassant through a Kindle edition.   He published nearly 200 or so short stories in his life so this may seem, like a lot but the volume is no longer than three Trollope novels.   The quality of the stories vary a lot.   Some justify his claim to be the second best short story writer in world history and some clearly were written by formula in a hurry.   I am a bit past the 50 percent point in the collection. 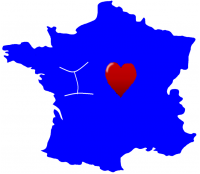 One of the common themes in his stories is a sense of lives ruined by steps not taken, whether from reticence, fear, vanity, love or any of a hundred reasons.  "Queen Hortense" is about a older woman who never married, her two sisters did.   She is queen over the court yard at her modest house.   Her subjects are the cats, chickens, and stray dogs she feeds and holds court over.


She never had a lover of any kind or even it seems many friends. That is the way she wanted things.  Her sisters do not seek a lot of contact with her and Hortense has let her appearance and her health go for way to long.   One day the sisters are notified that Hortense is on her deathbed.   They along with their children and husbands go to see her.    As they enter her room she is giving advise to children who are not there, she is scolding a nonexistent husband and swearing her love to a man that never existed.   Her sister conclude she is fantasizing about the life she never had and always told everyone she totally did not want.   The sisters go in her room and try to talk to her while her brother in laws wait in the outer room.    As the attending doctor comes out to tell the men she has passed away, one of them says to the other "that did not take as long as we feared it might".


Not a story for the best short stories of the world list (Guy de Mauapassant has at least ten stories that could go on such a list) but it brings a woman to life for us in just a few pages and has a solid meaning.

I wonder if I read this one. That's a problem with reading a bunch of them at once - the little ones blur a bit.

Francis Steegmuller puts the number of Maupassant stories closer to 300. He published almost 250 just between 1882 and 1887!

Thanks for referring to my meme. Be sure to add your link, I don't see it on the latest edition, here: http://wordsandpeace.com/2012/02/01/i-love-france-14-review-6-2012-paris-my-sweet/
To make life easier to fellow bloggers, I update the icon in the menu each time I post something new with that meme, so that you always get the latest edition. as there are not that many linkers so far, I also keep the links of previous posts