"Mother" - A Short Story by Urmila Pawar (translated from Marathi) 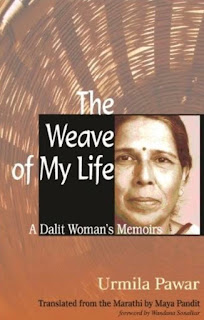 Works I have read so far for Women In Translation Month - August, 2017

One of the hoped for results of this year's Women in Translation Month is spotlighting the translations of writings by women from marginalized groups.  There may be no other group of people who were marginalized and culturally degraded by their own religion, by traditions 1000s of years old to the extent as were members of Dalit castes in India, now estimated at 225,000,000.  Caste discrimination is illegal in India now, much as racial discrimination in American, old prejudices to
not quickly die.

This morning's story, "Mother" is by Urmilaw Pawar born into a Dalit Caste family, in 1949 in Maharashtra.  At age 12, along with her family, she converted to Buddhism when a regional Dalit political leader advised Dalits to reject Hinduism.  She self identifies as a feminist, focusing on the issues women at the bottom of the social scale, women with no real protection.  Urmila Panwar wrote a number of highly regarded short stories about Dalit women, most of which included in the collection of her stories, Mother Wit.  "Mother" is the lead story in this collection.

Marathi is one of the twenty two official languages of India, spoken by about 70,000,000, mostly on the central western coastal area.

The story is narrated by the older daughter of a Dalit woman, with four children, in her early thirties and recently widowed.  Her husband was a school master, he left her some land and a house.  Her brother in law, whom her husband told her not to trust, has arrived.  He has brought a faith healer to tend to her very ill son.  He urges her to leave her land, in the city, and move to his farm in the village.  She is concerned her children will face serious caste discrimination in the village, her brother in law tells her she will be part of a Dalit community who will defend her.  The woman realizes her brother in law is trying to steal her land.  A terrible quarrel breaks out when the faith healer tells her children she is a demon from a past life trying to ruin their future.  It is obvious this was all part of a plot to get her to move to the village where she will lose her independence.

The story was translated by Veena Deo.

I read this story in an anthology perfect for Women in Translation Month,  Katha: Short Stories by Women from India.

A Dalit, a Buddhist and a feminist: Urmila Pawar's self-definition as all three identities informs her stories about women who are brave in the face of caste oppression, strong in the face of family pressures, defiant when at the receiving end of insult, and determined when guarding their interests and those of their sisters. Using the classic short story form with its surprise endings to great effect, Pawar brings to life strong and clever women who drive the reader to laughter, anger, tears or despair. Her harsh, sometimes vulgar and hard- hitting language subverts another stereotype - that of the soft-spoken woman writer. Pawar's protagonists may not always be Dalit, and the mood not always one of anger, but caste is never far from the context and informs the subtext of each story. As critic Eleanor Zelliot notes, there is 'tucked in every story, a note about a Buddhist vihara or Dr Ambedkar.... All her stories come from the Dalit world, revealing the great variety of Dalit life now.'  From Short Stories by Women from India.

The best literary work on Dalits, to my knowledge, is The Untouchable by Mulk Raj Anand, 1935.