"Your Baby" - A Short Story by Asmaa Alghoul (2015, translated from Arabic) 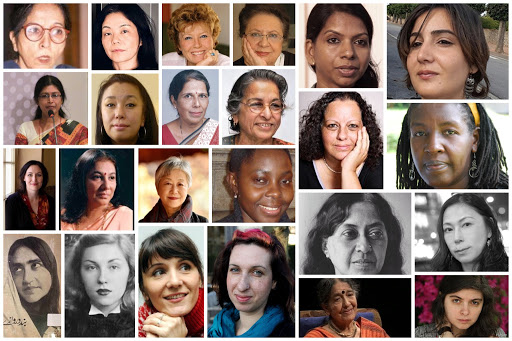 "Your Baby" by Asmaa Al Ghul brings to vivid reality the emotions and feelings of a woman giving birth.  The story has a very visual and cinematic quality.  I thought it was of interest that the woman noted her doctor was Indian and her nurse South African.  The lines below capture a universal feeling that transcends language limits:

"The phantoms behind the white sheet were moving more quickly now. For a moment she felt like she was the metal base of some electric machine, its gears and levers moving left and right. A wave of drowsiness came over her, the effect of the Indian doctor’s sedative, but she resisted it. She’d feel guilty if she missed the moment, missed the madness of nine months of creation. This, quite simply, was what it all came down to: the whole world becomes pregnant and gives birth and humanity keeps on growing by reproduction and mirrors, but her womb was the exception. It was as if all those pregnancies and births, the poetry of which the world knows nothing, had piled up inside of her. Their symptoms and conditions and emotions were all nesting in her nerves. They were all in her. In her heart. In her mind. It was like that throughout the nine months of anticipation, when she could feel a small being clawing her from inside her stomach.
Where was that tiny person?
She waited and waited, afraid the sedative would make its way to her eyelids and she’d lose… She opened her eyes to the sound of crying, but she couldn’t see the source of that tiny voice. Maybe they’d forgotten she was his mother. She didn’t know. She cried out, but the words would not come. She could hear the vague sound of crying, like water coming raspingly out of an old faucet. She knew her son wasn’t some old metal pipe, but she just wanted to make sure, to see him in that moment of absence and awareness.
“Your baby.”
Those words preceded their showing her that dirty naked creature that looked like a human snail, from his wet hair to his wriggling limbs. Except it was a creature that made her cry. Her crying came out in sobs, and in warm tears, too.
It was a crying that bore fear for that creature, a fear of the world she’d leave him as his inheritance. And there was another fear as well: that he’d make her bear the guilt when the time came for that life to experience disappointment in its hopes and dreams. A crying that printed a new wound in the heart, but one that bore the ancient name: love."

This story was translated by Kareem Abu-Zeid. The author's last name is sometimes translated as "Al Ghoul" or "Alghoul"

Asmaa Alghoul was born in 1982 in Rafah, a Gazan city bordering Egypt whose population is mainly Palestinian refugees. At the age of 18, Alghoul won the Palestinian Youth Literature Award. In 2010, she received a Hellman/Hammett award from Human Rights Watch, aimed at helping writers "who dare to express ideas that criticize official public policy or people in power." In 2012, Alghoul was awarded the Courage in Journalism Award by the International Women’s Media Foundation. She works for Lebanon’s Samir Kassir Foundation, which lobbies for media freedom. Her work has been translated into English, Danish and Korean.

Email ThisBlogThis!Share to TwitterShare to FacebookShare to Pinterest
Labels: Palestinian, Women in Translation