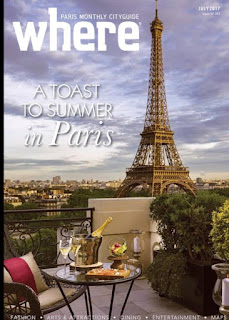 In July I posted on 5 living and 14 deceased authors, 14 men and five women.
Seven are from France, four Japan, two are Americans. One is from Chile, one Kenya, another Is Hungarian, one was born in Czechoslovakia, another the Ukraine.  I featured one Noble Prize Winner.  Three of the French authors belong on any list of greatest writers of all time.  Two were murdered in Nazi concentration camps and sadly two of my featured writers were in favor of the removal by any means necessary of all Jews from France.  One of the Americans is climbing toward huge commercial success with a forthcoming H B O series based on one of her works of speculative fiction.  James Baldwin becomes more relevant as America enters an era of hatred and ignorance.  Of the living writers, four have achieved great literary success, I fully expect the fifth to join this group.

There are 3103 posts online as of today

My reading in July was dominated by posts relating to Paris, as my participation in Paris in July, hosted by Thyme for Tea.  The Paris related works I read, including short stories, novels and nonfiction were

1.  Colette- Two Early Short Stories
2. The Black Notebook by Patrick Modiano
3. "A Duel" by Guy de Maupassant ( A Franco-Prussian War Story)
4. Life, Death, and Betrayal at The Hotel Ritz in Paris by Tilar Mazzeo (non fiction)
5. How the French Invented Love by Marilyn Yolem (literary history)
6. "The Lost Child" by Francois Coppée
7. "The Juggler of Norte Dame" by Anatole France- no post
8. A Very French Christmas- A Collection of the Greatest Holiday Stories of France
9. "The Illustrious Gaudissart" by Honore de Balzac
10. After the Circus by Patrick Modiano
11. "Gaudissart II" by Honore de Balzac
12. 6:41 to Paris by Jean-Phillipe Blondel
13. "Noel" by Irene Nemirovsky
14. Giovanni's Room by James Baldwin
15. The Madeleine Project by Clara Beaudoux
16. Nais Micoulin by Emile Zola
17. The Occupation Trilogy by Patrick Modiano
18. Journey to the End of the Night by Louis-Ferdinand Celine

I am very open to looking at all sorts of new books, including self published

I offer my great thanks to those who take the time to leave comments.  You help keep me going.

Spam question.  Much of my spam comments are all on one particular work, Pigeon
Pie by Nancy Mitford.  Most of the spam comments are generic praise that could apply to any post by anyone.  They are not written as a native speaker of English might and they contain no links or ads.  What can the purpose of these comments be?  None ever make it online but they have persisted for months

MEL u, you have been a star performer in the 2017 Paris in July event, with an unbelievable amount of reading & reviews. Thank you for all your great research and informtion... you have read & reviewed many books & authors I will probably never read, but have introduced me to some i now want to read.. thanks.

Mel, you are certainly a prolific reader! Congratulations! Your reading life is truly remarkable.

Tamara. I was very motivated by your event. I had a great time in my reading. I enjoyed the movie reviews and the arm chair traveling the event generated. Hope I can return next year.

Suko, thanks so much.