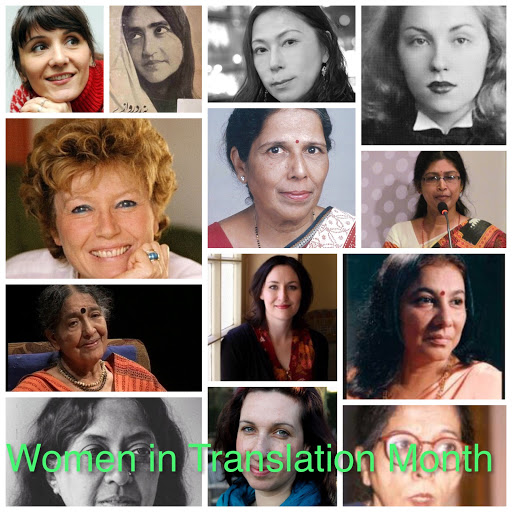 Shortstories I have read so far for Women In Translation Month - August, 2017

Today's story, "Red Glow of the New Moon" by Kundhanika Kapadia, translated from Gujarati is a beautiful story about the joys a reading life can bring.  I am so glad I read this classic reading life story, I might never have discovered it but for my participation in Women in Translation Month.

The central character of this story is a quite elderly woman, living in Gujarati, India with her extended family.  She has always been a deep reader of literature and philosophy and spiritual teachings.  She especially loves the poetry of Tagore, Yeats, Rilke, and Blake.  She has much of their work and spirit fully internalized.  She lives with her two sons and their wives.  She has another son who moved to America long ago and has married an American woman.  He and his wife are on the Way Home, having been advised Mother is very ill.

No one in her family understands her relationship to the beauty she finds in literature.  She is worried how her American daughter in law will fit in, she remembers long ago, she has never met her, she sent her a collection of the poetry of Tagore as a wedding gift.

"She glanced at the sky from the window. She had so arranged her bed that through the window she could have a good view of the neem tree in the courtyard. Very often, the boughs of the neem tree swung violently in the wind and seemed to be trying to touch the window. Through the gaps between the boughs she could get a glimpse of the blue sky and bits of clouds occasionally floating across the sky. At times a noisy bird would come and perch on the boughs. The bird with a long tail, may be doodhraj. Normally that bird lives amidst dense foliage of
trees and is not easily seen. But the bird came and sat in such a way as though it had come to visit her. There was much excitement in the house. Deepankar and Maria were to arrive by the afternoon flight. Deepankar was her youngest son. He had gone to the States seven years ago. He had married an American girl. He had often written to say that he wanted to come home, but had not. But now that the mother was on her deathbed, he was coming with his wife. An American girl. She wondered what she would be like. She smiled faintly to herself. It was a song by Tagore, rendered into Gujarati by the poet Meghani —'I wonder what she would have been, my mother. I don't remember in the least.' In her own time she had pored over Tagore's writing. Tagore and Yeats and Ibsen. On Sundays, she would go with friends to the riverbank or to the forest. They would eat and drink, rest under
the trees, sing songs and then they would recite some poems aloud... Tagore's 'I shall not let you go...' and William Blake's 'To see the world in a grain of sand...' And 'I will arise and go now.... to see where night and day the waters of the lake pat the bank —that poem of Yeats they had almost learnt by heart. And the poems of Masefield —'Give me a pathway and sky overhead... a bonfire by the roadside when it's cold... again the dawn and travel once more....' She had lived in the midst of beauty in myriad forms. She had found life always worth living. And now the present generation... her elder son and his wife Maya, her middle son and his wife Chhaya... she wondered if they ever read Tagore, Kalidas, Shakespeare? As for Nietzsche and Bergson, they had probably not even heard their names! She had kept her favourite books in the bookcase in her room. Right from Creative Evolution to
Fourth Way, Ekottoarashari and Rabindra Veena..... and the combined anthology of John Donne and Blake... there were many books. But her daughter-in-laws had never touched her bookcase. They had shown no curiosity about those books. They read books by Alistair Maclean, James Hadley Chase, Ian Fleming, Gulshan Nanda. 'We are feeling bored" —that was their constant refrain. The word boredom constantly figured in their talks. She had not particularly experienced boredom in her life. "

The remarks on boredom really struck me.  Her reading has kept her from every experiencing boredom.  She has found a transcendent beauty.

"Amiel. Bergson, Tagore... she and her husband talked about them as if they were their friends. They had drunk deep from their writings, their lives and their philosophy. And now the moment of death was not far away. The greatest, most delightful moment—the highest experience of life. She wanted to retain the glow of that moment like the full moon or the new moon, with its reddish light so that it would drench her limbs."

The closing of this story is simply wonderful, I know I am gushing but like the narrator I am so glad I grateful to be able to feel the depth of love in the close of this story.
Her American daughter in law comes to sit with her.  She recalls Years ago she had sent her American daughter in law an edition of the poetry of Tagore.  The daughter in law had memorized and internalized the poems.  A deep immediate love was formed between two very different on the surface Women.  As they look out of the window at the glow of the red moon, they both sense the moon has come to say goodbye.  The woman is now ready to move to another plane of existence, joyous that she has at last truly bonded with another lover of the Reading Life.

I thought it very interesting that it is noted that she read Tagore in translation.

This story can be read in a first rate anthology, Our Favorite Indian Short Stories.

Gujarati, spoken primarily in the state of Gujarat, has about 50,000,000 million speakers.