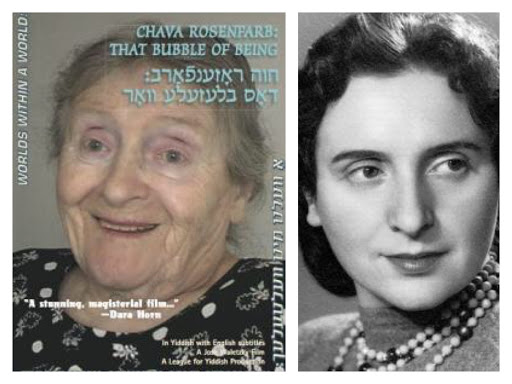 “Elgia’s Revenge” (translated from Yiddish in 1994 by Goldie Morgentaler, first published in 1981) is the most famous work by Chava Rosenfarb. (With an estimated reading time of 65 minutes, some would see it as a novella.) It is included, longest story, in Found Treasures:Stories by Yiddish Women Writers edited by Sarah Swartz, Ethel Raicus, and Maggie Wolfe.  This is the very model of a perfect anthology.  There are eighteen writers featured, each with very well done biographies.  Included also is an excellent introduction by Irene Klapfisz.  I Will be drawing on this collection throughout  2018.

The story is told by a woman, now living in Montreal, who was a Kapo at a concentration camp.  Kapos were Jewish inmates who were in charge of other Jews. They acted as police for the Nazis, often beating other Jews and even helped select those to be executed.  They did the cruelest jobs.  By doing this they received preferential treatment.  They were totally hated by all.  We first meet our narrator as her camp has been liberated.  She is riding with other ex-internees on an American trucks. One of the men on the truck is identified as an ex-kapo.  He is beaten to death.  Our narrator once preformed an act of kindness for a woman on the truck and she begs her not to tell others she was a kapo.  We learn of the horrible sexual abuse the narrator took just to stay alive.  She tells us many in the camps lost their faith in God.

Eventually both women now move  to Montreal, where many Holocaust survivors were accepted.  We follow the lives of the two women for years.  We see how the camp years impacts their close relationships.  As I learned in a nonfiction book this month, the survivors were often highly cultured people who were so happy to be able to read again.  The narrator and Elgia are part of a social group of Holocaust survivors.  Most do very well in Montreal, moving from their initial small apartments to elegant houses as they succeeded professionally.  The narrator herself becomes affluent by founding a high end women’s clothing store.  Rosenfarb does a wonderful job creating the characters, we meet their husbands, observe their affairs.  Always the narrator fears Elgia will reveal to the others she was a kapo.

“Elgia’s Revenge” was a pure delight.  It is not just a story of The impact of The Holocaust on survivors but on The Jewish Canadian Imigrant Experience.

CHAVA ROSENFARB (1923 - 2011)Prize-winning writer of fiction, poetry and drama, Chava Rosenfarb was born February 9, 1923 in Lodz, the industrial centre of Poland before the Second World War. She completed Jewish secular school and gymnasium in this community where several hundred thousand Jews lived —nearly half the population of the area. The Holocaust put an end to one of the richest centres of Judaism in all of Europe. Like many Jews of the city, Rosenfarb was incarcerated in the infamous Lodz ghetto. She survived there from 1940 to 1944, when she and her sister Henia became inmates of the concentration camps of Auschwitz, then Sasel and Bergen-Belsen. Even in the ghetto Rosenfarb wrote, and she hasn’t stopped since. Her first collection of ghetto poems, Di balade fun nekhtikn vald [The Ballad of Yesterday’s Forest] was published in London in 1947. After the liberation Rosenfarb moved to Belgium. She remained in Belgium until 1950, when she immigrated immigrated to Montreal. In Montreal, Rosenfarb obtained a diploma at the Jewish Teachers’ Seminary in 1954. Rosenfarb has produced a prolific body of writing, all of which speaks from her experience during the Holocaust. Her work has been translated into both Hebrew and English. Rosenfarb has been widely anthologized and has had her work appear in journals in Israel, England, the United States, Canada and Australia in Yiddish and in English and Hebrew translation. Among the many prizes awarded her work, she has received the I.J. Segal Prize (Montreal, 1993), the Sholom Aleichem Prize (Tel-Aviv, 1990) and the Niger Prize (Buenos Aires, 1972). She has travelled extensively, lecturing on Yiddish literature in Australia, Europe and South America as well as in Israel and the United States..  From Found Treasures: Stories by Yiddish Women Writers..  from Found Treasures: Stories by Yiddish Women.

This sounds like an essential read; I am putting in a library request for the collection. Thanks for bringing it to readers' attention, Mel.

Buried in Print. Several of the writers immigrated to Canada. Thanks so much for your comments

Because this story was so long, I waited to read it until I had time to sit with it from beginning to end.

It was overwhelming how the women's relationship was set in tone from the start, and how the guilt/responsibility pervaded their every interaction across time.

This story is an excellent illustration of what kinds of things it means, when someone talks about the legacy of trauma in the lives of survivors; on the surface, it might seem like these women are living entirely in the present-day, but the story shows how the past is always with them, even in the smallest detail.

Thanks again for the recommendation. (I read it in Survivors, a collection of seven stories by her, published by ECW Press in Canada, if anyone else is looking, in translation by Goldie Morgenthaler.)