Added note on December 26, 2017. Very moving feature from Sixty Minutes on Catholic Clerics working to save ancient books From ISIS 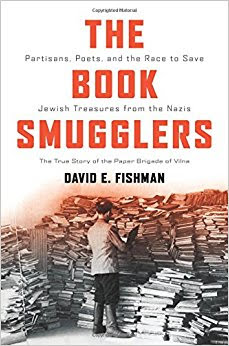 The Holocaust on The Reading Life


The Book Smugglers by David E. Fishman tells the story of the heroic efforts of a group of courageous Jews in the Vilna Ghetto, during World War II , to save millions of Jewish books, mostly in Yiddish, and manuscriots from being stolen by the Nazis.

Vilna Lithuania was considered The spiritual and intellectual heart of Eastern European Jewish Culture.  The Yivo Institute, located in Vilna, housed a vast collection of Jewish books and Cultural treasures.  Scholars went there  from all over Europe to delve in their archives. When The Nazis took control of Vilna they ordered all Jews to move into a designated Ghetto and to wear a Yellow Star.  Ultimately the objective of the Nazis was to kill all the Vilna Jews but they also wanted to take anything of value back to Germany.

The Nazis put a refined and educated devout Nazi in charge of The Yivo Institute.  His Mission was to select thirty percent of holdings to be sent back to Germany where they would be exhibited as the products of a depraved culture that they intended to wipe from the earth.  The remaining books were to be pulped.  They even gave ancient versions of the Torah, done in leather, to shoe makers. The Germans forced highly educated scholars to work as slaves, keeping records of everything.  Others were employed in huge task of perparing the material for transport to Frankfurt or to send books to be destroyed.  This nearly broke hearts of those involved.  They began to smuggle books to hiding places, hoping that even if they were killed, one day some one who loved Jewish books would find them.

Fishman does a wonderful job bringing to life the scholars, poets, and others involved in this effort.  Just surviving was a day to day struggle.

After war ends, the focus  is on getting the books back from Germany and retriving them from hiding places.  This became a political nightmare.  First it had to be determined who owned stolen books.  Decisions had to be made about where to house the estimated 1.5 millions books and artifacts.  There were no longer large Jewish populations in Warsaw or Vilna and many Holocaust survivors soon left for Palestine or America, mostly to New York City. After a great struggle the huge bulk of material was shipped to the Yivo Institute in New York City, where it remains today.

I was very moved when Fishman described the eagerness in which those just liberated from concentration asked for something to read.  The items requested ranged from popular fiction, Spinoza or Tolstoy, technical books, and theology.

In prior posts I have said that the Holocaust was a war on a culture deeply into books, learning, and Reading, a war on the reading life.  Fishman in this wonderful book made this even clearer for me.

In the interest of full disclosure, I was given a copy of this book.

Thank you for this post, Mel. This sounds like a book I would love to read. What a fitting title! Your opinion on how it was also a war on reading moved me. It reminds me that I can't take books for granted.

Mel, thank you for discovering and adding that precious video to the post. The whole report on monks's effort to save books from ISIS reminds of a powerful passage from Ray Bradbury's 'Fahrenheit 451'. It is, “There must be something in books, something we can’t imagine, to make a woman stay in a burning house; there must be something there. You don’t stay for nothing.” The monks were brave and intelligent. And I loved the quote, "Liberation brings a lot of destruction." It was a very powerful video, Mel. Thank you for sharing. :)