Note added on December 26, 2017. A Link to a very moving and inspiring story on Catholic Clerics in Iran Saving Ancient Books from ISIS. - from Sixty Minutes 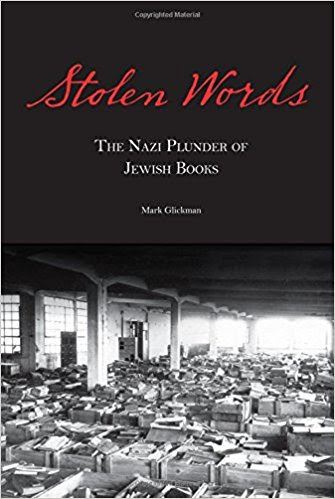 A Presentation by Mark Glickman on Stolen Words. From the Library of Congress. - Highly Recommended

Everyone knows about the burning of Jewish books by the Nazis, which began in 1933. It was great theatre for the Nazis base.  I was shocked to learn, from Mark Glickman, that with a few scattered outbreaks, the book burning only lasted for about three weeks. There were a few reasons behind this.  One was the practical fact that books are hard to burn.  Secondly it was bringing terrible international publicity on the Germans.  The Germans feared if this publicity continued it would ruin the 1936 Olympics.  They wanted the hosting of this event to showcase their great achievements.

The Germans, as Glickman elegantly details, began to collect millions of Jewish books from libraries and private collections all through the countries they
conquered.  France proved an incredible treasure trove.

Nazi pseudo intellectuals lead the efforts.  They used as staff Jewish librarians and real scholars as slave labor.  The Nazis wanted to create the basis, post war, for the study of the culture they intended to destroy, that of European Jews.  The objective was to bring back to Germany about 30 % of the books and pulp the rest.

Glickman fascinatingly details the efforts to return the books to their owners after the war.  Americans, they recruited very knowledgeable persons, were largely in charge of the reclaiming of the books.  It proved very hard to determine who once owned the books.  In the end 40% were sent, mostly to the Yivo Institute in New York City, 40% to Israel and the rest to Jewish Libraries in Argentina, South Africa and elsewhere.

Glickman details for those not familiar with it, some of the ideological underpinnings of the Nazis.  He also talks about why books, learning and reading were so important to the Jews.

This book is clearly a labor of great love.

I advise anyone with more than a passing interest in Jewish Heritage and the Holocaust to read Glickman’s book first then that of David Fishman, focusing mostly on events in The Vilna Ghetto.  Glickman’s book is perhaps less academic.

Temple B’nai Tikvah welcomed Rabbi Mark S. Glickman as our Rabbi in July 2016. Rabbi Glickman previously served as the interim rabbi of Beth Shalom Synagogue in Baton Rouge, Louisiana. He has also served congregations in Ohio, Washington State, and Colorado. In addition, Rabbi Glickman has been a religion columnist for the Seattle Times and the Tacoma News Tribune and has served on the faculties of Pacific Lutheran University and Seattle University.
Born in Cincinnati, Ohio and raised in suburban Chicago, Rabbi Glickman graduated cum laude from Washington University in St. Louis in 1985. He received his rabbinical ordination from Hebrew Union College – Jewish Institute of Religion in Cincinnati in 1990. His first book Sacred Treasure: The Cairo Genizah (Jewish Lights Publishing) was published in 2011. His second book Stolen Words: The Nazi Plunder of Jewish Books (Jewish Publication Society) was released in 2016.

seems like a valuable book; it reminds me of a New Yorker i read about not too long ago who made up his mind to collect all the Jewish books he could find and spent his whole life doing that; in the end he founded libraries with the millions of books he had collected... unfortunately i can't recall his name... he was an important guy, tho...

Mudpuddle. Is this it

AAron Lansky... yes, that's the guy... truly a superman in the book world... btw; i hope you and yours have a very nice holiday season...

Mudpuddle. Thanks for the wishes. For sure I hope you have a great holiday

Mudpuddle, I reposted this with a link to a brand new Sixty Minutes feature. Posting comment here in hope you will see it.