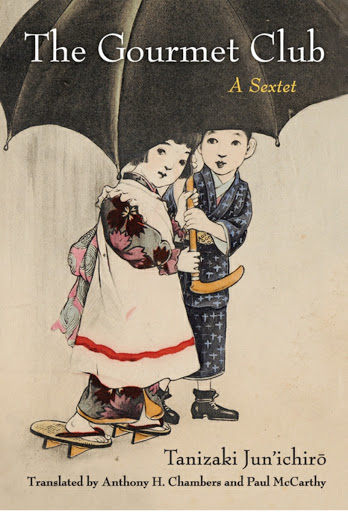 “The Gourmet Club”  gives us a fascinating look at high end dining by the rich in Tokyo during the 1920s.  The Gourmet Club has five members, all idol rich men bonded by their love of sybaritic dining, with an occasional exquisite prostitute as a side interest.  A man, known as “The Count” is the head of the group, which meets at his mansion.   They roam the city looking for Gourmet delights.  One day The Count is out scouting around alone.  He smells something wonderful cooking from a simple Chinese restaurant in a new to him part of Tokyo.  This turns out to be a wonderful source of traditional Chinese food, lovingly described by Tanizaki, who had a reputation as a gourmet himself.  It is a magic place.  The story is very worth reading just for the very detailed descriptions of the menus.  I will leave for your imagination the recipe for and the rituals associated with “Fried Korean Woman”.

As far as I know this story can only be read in the collection pictured above.  I was kindly given a copy of this book, which is a great edition to Japanese Literature in Translation.

Jun'ichiro Tanizaki (谷崎 潤一郎) was a Japanese author, one of the major writers of modern Japanese literature, and perhaps the most popular Japanese novelist after Natsume Sōseki.

Frequently his stories are narrated in the context of a search for cultural identity in which constructions of "the West" and "Japanese tradition" are juxtaposed. The results are complex, ironic, demure, and provocative.  From Goodreads.