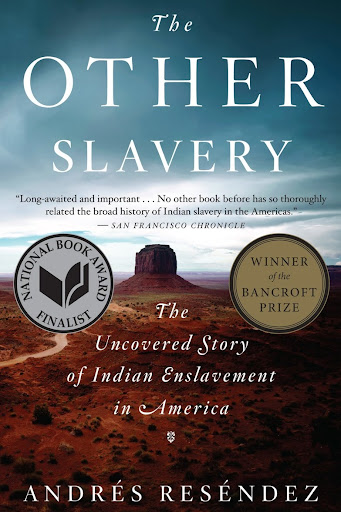 The Other Slavery-The Uncovered Story of Slavery in America by Andres Resendez (2016) should be on Reading list of anyone with a serious interest in the colonial era history of Spanish ruled South American, the Caribbean Islands and the western United States.  All teachers of history should read this book and all libraries that are able should stock this book.  It is a very illuminating account of what Resendez calls “The Other Slavery”, that of Indians, largely but not entirely by colonists from Spain.  He correlates this to transportation of Africans into slavery in much detail, as he knows this is what most will think about when they hear the words “Slavery in America”.  He estimated about four millions Indians were enslaved by the Spanish  colonists, as everything from sugar mill workers, silver and gold mine workers, House servants of all sorts
beasts of burden, concubines (the Spanish came without women), and agricultural labourers.  Slaves were even used as foot soldiers in raids to acquire other slaves.

Slavery was widely practiced throughout Pre-Columbian America, which made it easier for the Spanish to enslave natives.  There were numerous variations of slavery, from outright chsttel slaves, to those sentenced as slaves for punishment to those in debt bondage.

Resendez tells us a full history of Indian slavery would require a book at least thirty times as long as The Other Slavery-The Uncovered Story of Slavery in America.  Instead he focuses on selected places and times detailing How slavery functiioned in a variety of social and economic circumstances.  The Spanish Crown was actually against the enslavement of Indians so we see the many ways the for from Spain colonists kept slaves, using The many loopholes in the regulations.

We get to know several leading colonial slavemasters, we go along on slaving raids, we learn the value of different types of slaves.  We also learn How slavery played a role in the very diverse Indian  societies.  Resendez takes us everywhere from the huge Mexico City area to small pueblos in what is now The American southwest.

Indians were often shipped for from home, I was shocked to learn of 1000s of Indians taken from the Carolinas to work in the deadly sugar fields on the Caribbean Islands, in the 1600s. Resendez in a fascinating page even talks about slavery as a pre-colonial part of Society in The Philippines.

Indians societies were ravaged by European diseases to which they had no immunity, especially smallpox.  It is not possible to give exact numbers but Resendez says the combined impact of slavery and disease reduced indeginous populations in many areas to less than ten percent.  In Florida The death rate was close to 100 percent.  He tells about how the early Mormans looked at the Indians and spends a good bit of time in old California, showing us how Indian slaves labored but did not profit from the gold rush.  We learn how Indians treated their own slaves and traded in captured colonial children.

Resendez takes us up to The American Civil War Era and in his very interesting epilogue talks about slavery in the 21st Century.

The Other Slavery-The Uncovered Story of Slavery in America by Andres Resendez is a very well constructed narrative, fully documented.  There is much more than I have mentioned in this book.

I highly recommend this book.

The author’s self description from his Amazon page

I grew up in Mexico City where I got my BA and worked in various capacities--the best job I ever had was as a historical consultant for telenovelas (soap operas). After getting a PhD in history at the University of Chicago, I taught at Yale, the University of Helsinki, and UC Davis. My latest book, The Other Slavery (Houghton Mifflin Harcourt, 2016), tells about the enslavement and trafficking of hundreds of thousands of Indians in North America from the time of Columbus to the late 1800s. I have also written about the dawn of European colonization as seen through the eyes of the last four survivors of a disastrous expedition to Florida in the 1520s (A Land So Strange--Basic Books, 2007); and another book that explores how Spanish speakers, Native Americans, and Anglo-American settlers living in Texas and New Mexico came to think of themselves as members of one national community or another in the years leading up to the U.S.-Mexico War (Changing National Identities at the Frontier--Cambridge University Press, 2005).

Email ThisBlogThis!Share to TwitterShare to FacebookShare to Pinterest
Labels: History

I have been shying away from history. I am not able to pin down my reasons, but now it feels like the time to explore history too. This book sounds painful, but important all the same. I will add it to my list. Thank you for the recommendation, Mel.

This is on my list and although I have not been able to buy many books lately, this is just the kind which I do try to buy, to lay down my book-buying dollars for publishers willing to expose these uncomfortable truths. Essential reading indeed. Thanks for posting on such an important subject.

Buried in Print. I lucked out and got kindle edition on sale for $2.95. It has nothing on slavery of the indegiousness population in either French or English colonial Canada.