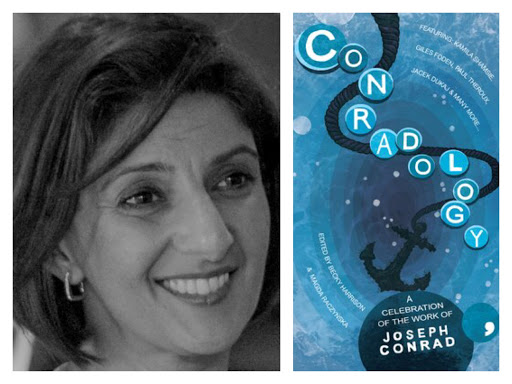 This will be my sixth post upon a short story by Farah Ahamed.  Obviously I greatly enjoy and respect her work.

I recently acquired a very interesting collection of short stories and nonfiction articles inspired by the writings of Joseph Conrad, focusing on his importance as a post colonial writer of the great cultural importance, Conradology. I was very happy to discover that a story by Farah Ahamed was included.

Dr. Patel, Safari Division Manager for a large Kenyan company, Amber Investments, is at a remote luxury lodge.  He is there to judge the Human Resources potential of the Maasai tribal people, the staff of the lodge.  The accountants and attorneys have already decided it would be a good addition to the luxury lodge portfolio of Amber Investments.  He is there to decide on the viability of the Maasai as staff.  His room is decorated like a Hemingway fantasy hunting lodge.  The company needs the Maasai to make things seem authentic to the wealthy guests.  In his brilliant book on post colonial Irish Literature, Inventing Ireland: The Literature of the Modern Nation, Declan Kiberd talks about how corporations are using the culture of Ireland to create a kind of Disney land of leprechauns and great writers to create money making tourist attractions.  This is just what Dr. Patel is helping Amber Investments do to the ancient cattle culture of the Maasai.  He lacks the self-awareness to understand what he is involved with or why his companies endeavours are resented by the Maasai.

Ahamed does a great job showing us Dr. Patel’s reaction to a huge herd of Wildebeasts crossing a river and being attacked by crocadiles.  When Dr Patel tells his Maasai driver why he is called “Doctor” even though he is not degreed, you can almost feel the  driver’s contempt for him.  It all goes over Patel’s head, he just records in his note book that The Maasai may need additional training to be good servants for the weathy guests.

We sit in as the lodge manager tells Patel of the cultural impact the loss of their lands has had on the Maasai.  The government of Kenya is concerned largely with keeping foreign investors and tourists happy, not so much in preserving traditions.

Slowly we see a bit into how much the culture of the Maasai has been destroyed as the land for their great cattle herds, once the source of real wealth and pride, has been taken from them, lately often sold to Chinese investors who bring junkets of guests to gawk at the Maasai and the animals.  Patel could not care less about the Maasai.

Something very interesting happens to Dr. Patel.  I will leave this for you to discover.

This story is very much worthy to be considered in the tradition of the post colonial stories of Joseph Conrad.  We can see the destructive impact the lodge has on the Maasai.  We sense much worse is coming.The entire collection is very interesting.  I do think an important aspect of the work of Conrad is missing in the well done introduction and if I post further on the collection I will speak of this.  There is a deep irony in the use of Doctor Patel as the evaluator of the Maasai, given he is totally a colonial construct with no ties to his ancestral culture left.

I hope to follow the literary career of Farah Ahamed for many years.

Farah Ahamed is a short fiction writer. Her stories have been published in The Massachusetts Review, Thresholds, Kwani?, The Missing Slate and Out of Print among others. She was highly commended in the 2016 London Short Story Prize, joint winner of the inaugural Gerald Kraak Award and has been nominated for The Caine and The Pushcart prizes. She was shortlisted for the SI Leeds Literary Prize, DNA/Out of Print Award, Sunderland Waterstones Award, Asian Writer Short Story Prize, and Strands International Short Story.. from the website of Comma Press.

To mark his 160th birthday, 14 authors and critics from Britain, Poland and elsewhere have come together to celebrate his legacy with new pieces of fiction and non-fiction. Conrad felt that the writer's task was to offer 'that glimpse of truth for which you have forgotten to ask.' In an age of increasing isolationism, these celebrations remind you of the value of such glimpses.
Commissioned as part of the Joseph Conrad Year 2017, the book has been published with the support from the Polish Cultural Institute, the Polish Book Institute, and the British Council... from the publisher’s description

from this excerpt, Patel seems an intriguing contrast with Lord Jim...