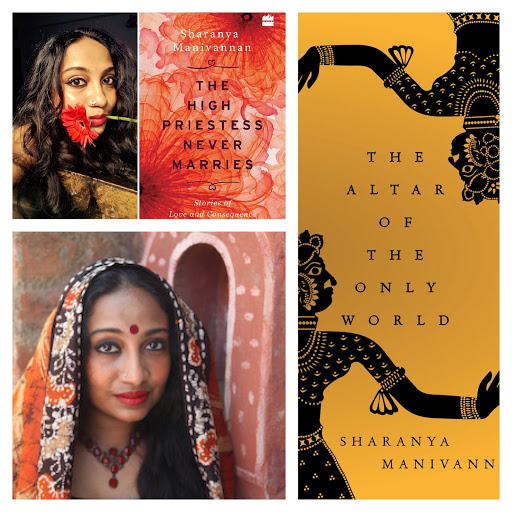 An Exquisite Reading of “The Secret of Secrets” by Sharanya Manivannan

Deepika Ramesh of New, Fractured Light on “The Alter of Fire” by Sharanya Manivannan

It is interesting how chance connections in the great International Book Blog Community can lead you to discover new to you writers you might never have otherwise come upon.  In November I participated in German Literature Month, as I have done now for seven years.  I noticed a blogger had posted on a great novel set in Germany during World War II, Alone in Berlin by Hans Fallada.  After reading the very insightful post by Deepika Ramesh of New, Fractured Light I entered a subscription to her blog.

Thanks to this I learned now from Deepika of a fascinating new to me writer Sharanya Manivannan.  As my last post in 2017, I will talk briefly of two of her short stories and two of her amazing poems.  She is also an amazing literary performance artist, if you do nothing else today, watch the video of her reading I link to above.

“Mother-Tongued” (a Short Story) is a delightful erotically charged work. I once spent many hours at Angkor Wat, fixated on the stone images of women.  I see Manivannan’s depiction of sexuality as arising from the women on ancient temples.  The story opens with a pun worthy of Thomas Pynchon at his best or worse.  Either way I had to laugh.

“The first time I spent the night at the cunning linguist’s, a blood orange moon rose out of the sea. We watched it ascend from his third-floor window and later, when we both woke momentarily mid-sleep, he grabbed my chin and said ‘Yennadi?’ and kissed me rough-soft. That was the moment of my downfall. When I turned up at his doorstep the next time wearing –by sheer coincidence –a sari, he made love to me without taking it off. When I ran away to Auroville (crying all the way down on the AC bus from Koyambedu), he called within a week to say, ‘Nee Pondicherry-le irukira nerathila, Madras-ay kamathila vaadi poghuthu.’ ‘You are in Pondicherry, and all of Chennai is wilting with desire,’ I explained to friends who did not understand. Flush with superlative sex and dizzy with delusion, I told everyone I knew.”

If one wanted to you could talk now of Hindu notions of creation arising through the sexual activity of gods or you could simply enjoy a though provoking story centring on sex.

“I Come Bearing Mangoes” (a poem, Reading time 1.5 Minutes, https://youtu.be/z2bSD-Dca30) is in the voice of an arriving guest bringing mangoes.  I was attracted to this poem initially by my great love for mangoes.  On our family property there is a huge mango tree that produces so much in the summertime we can give boxes to our friends.  I see no point in me or anyone “explaining” this poem.  Just listen to it and maybe at least know you are in the tropics.

“Gigolo Maami” (A Short Story) deals with the sexual relationship of a woman and man she calls her “Gigolo Maami” (Mommy).  We do not learn if he is really being paid or not. She calls him that because after sex he fixes her breakfast.
She sometimes taunts him by telling him a dancing Boy she is friends with makes better coffee. A very entertaining story which left me wanting more.

“The Secret of Secrets” (a poem, performance time about six minutes) is a work of great depth.  The speaker incarnates diverse figures from ancient Tamil mythology.  I have listened to the Reading by Manivannan at least five times.  I feel transported back thousands of years to a time.  Almost to the birth of a culture.  I felt very young and very old, wanting no more than to be ravished by a demonic goddess.  She is a brilliant rhymer.

I will be revisiting the work of Sharanya Manivannan numerous times in 2018.

I offer my great thanks to my friend Deepika Ramesh in the Reading Life, we were there when the Goddesses arrived and we will be here when they leave, for helping me discover Sharanya Manivannan

Mel, thank you very much for all the kind words. I really didn't expect this. It's amazing how I can say goodbye to 2017 with the delight of having been featured in your blog. When I read Sharanya Manivannan's stories and poems, I knew I must talk about her work to a lot of people. I wanted my blogger-friends to know that such writers are in India. While popular writers are celebrated, I wanted readers to know about a writer who lives in my city. And I am so glad Sharanya Manivannan's works resonate with you. I will share the blog with her right away. Thank you again, Mel! And thank you for all the encouragement.