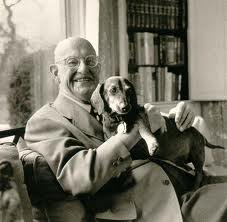 "In the desperate circumstances of the time, it was excusable to be angry at what Wodehouse did, but to go on denouncing him three or four years later -- and more, to let an impression remain that he acted with conscious treachery -- is not excusable."-George Orwell


Transcripts of all the P. G. Wodehouse War Time Broadcasts

"The Press and Public of England seem to have jumped to the conclusion that I have been in some way bribed or intimidated into making these broadcasts. This is not the case"


I read my first work by P. G. Wodehouse in April of 2010.  It was a delightful story, "The Man With Two Left Feet" featuring the valet of our dreams, Jeeves.   I planned to read more of his work for sure.

Two things have motivated me to read him again.   Believe it or not Wodehouse (1881 to 1975-UK-there is some background data in my prior post on him) has been in the news in the last week.   It seems the British intelligence agency M15 has recently released its reports on the radio broadcasts Wodehouse made from Nazi Germany aimed at the USA.     At the time, understandably  so, the reaction to these broadcasts in the UK was one of great outrage.    After the war there were calls to have him tried for treason.   He lived the rest of his life  after the war in the USA, never returning to England.   Here is a sample of the broadcasts, taken from Orwell's essay,  of some of the remarks that caused great offense:

"I never was interested in politics. I'm quite unable to work up any kind of belligerent feeling. Just as I'm about to feel belligerent about some country I meet a decent sort of chap. We go out together and lose any fighting thoughts or feelings.


In the days before the war I had always been modestly proud of being an Englishman, but now that I have been some months resident in this bin or repository of Englishmen I am not so sure. ... The only concession I want from Germany is that she gives me a loaf of bread, tells the gentlemen with muskets at the main gate to look the other way, and leaves the rest to me. In return I am prepared to hand over India, an autographed set of my books, and to reveal the secret process of cooking sliced potatoes on a radiator."

In  England in 1941 this had to have sounded like treason, especially the idea of handing over  the jewel of the empire for a "loaf of bread".

Orwell  (1903 to 1950, author of 1984 and Animal Farm) basically says Wodehouse was a very apolitical person whose intellectual development and knowledge of the world stopped expanding about 1918 or so.   He says Wodehouse did not really have the common sense to see the harm he was doing and perhaps did not understand the terrible nature of the war and the Nazi regime.

It seems, reading through all this, that Wodehouse was charmed and flattered by higher ups in the German propaganda ministry and told his broadcasts might "cheer people up".    He was also paid for them and given the run of  Paris.   After the war he said he will always regret his broadcasts but he meant no harm.   To Orwell, he was more silly than evil or traitorous.  He never denounced the UK or its leaders, attacked Jews, or said he wanted the Germans to win.   He just made some broadcasts because some charming to him men in odd uniforms asked him to make them and were nice to him.    He really meant no harm to anyone.   You will look a long time before  you find a wiser or more honest writer than George Orwell.

Most days I check at Americanliterature.com to see what their feature short story of the day might be.  (This is a very good source for short stories-they have 1000s online.)   Today the selection was "Jeeves in the Springtime" by P. G. Wodehouse.
Part of the appeal of Wodehouse is just from people thinking how wonderful it would be to have a full time valet like the wonderful Jeeves looking after us.

"Jeeves in the Springtime" is really a lot of fun.   Even in 1921 it was kind of a throw back to an earlier era.   There is a really clever enjoyable surprise ending in this story.   One of the reasons, I think, that people, like Wodehouse's work so much is just in the simplicity of the world the characters in his stories live in.   For example one of the worse things that ever happened in the life of the uncle of a friend of Bertie Wooster (the employer of Jeeves) was that seven years ago his cook made a mayonnaise with too little cream.

"Jeeves in the Springtime"  can be read  online  at lots of places.    I enjoyed it a lot and it has a lot of good slang from the era.-

"In Defense of P. G. Wodehouse" can be read here

If you want to know more about P. G. Wodehouse's war time broadcasts, read them!-  They are very well written-the rest you can judge for yourself if you are interested.

I will continue to read him for sure.

I'm a HUGE fan of Wodehouse and have read a great deal of his books. I had read about his broadcasts and Orwell's defense. I agree that the most one can accuse Wodehouse of is thoughtlessness, definitely not treason.
here's a nice write-up about Wodehouse by Stephen Fry if you haven't already read it.
http://www.pgwodehousebooks.com/fry.htm
I loved the Jeeves and Wooster series by the Fry and Laurie team.

This is all news to me. I've been a fan of both authors for many years though I've obviously not delved too far into their biographies, except to read Orwell's essays and memoirs.

So I can't comment with any kind of authority here. I'll continue reading Wodehouse in any case. But this does leave a cloud over him, I must admit. Was he broadcasting from occupied Paris? It's difficult to see how even an apolitical person could do that in good conscience. I am willing to defer to Mr. Orwell, however.

I've read the Orwell, thanks for the link. You've made for a very interesting morning. That Wodehouse was not able to return to the U.K. is unfortunate, but no where near as bad as what many others went through.

I find myself nodding in agreement with Orwell's closing paragraph. Going after small fish like Wodehouse and so many others while much more serious treachery went unpunished is a much greater sin. I'm reminded of the U.S. soldiers currently in prison for what happened in Abu Grhiab (which I know I'm misspeling) all of them very low ranking soldier, while those in authority who made it U.S.policy to torture prisoners have never been held to any level of account at all.