"Death" by Wladyslaw Reymont (1906, from The Peasants) 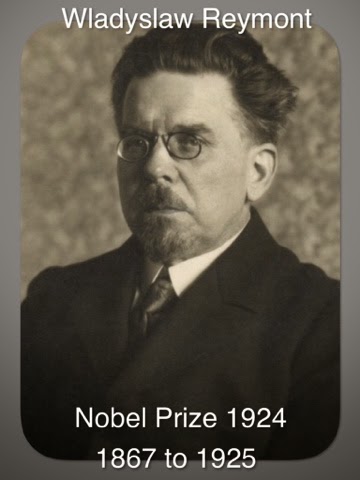 I recently decided I needed to expand my reading into works by authors from Eastern Europe.  Luckily I have recently found  two anthologies of older short stories by Polish writers online.  I have already read a great story by Boleslaw Prue and for sure I will be reading more of his work.  There are two stories by  Wladyslaw Reymont, the 1924 Nobel Prize Laureate, centering on the lives of people in villages, people once called "peasants".  If "Death" is an example, Reymont's vision is very dark.
"Death" is set in a village.  An old man is on his death bed, his daughter screams at him to get out of her house, she does not want him dying there.  It seems he has left his 15 acre farm to his other daughter so she hates him.  She decides to move him out to the pigstye, of course she kicks him a few times.  Compressing a bit, and the action is just one nasty thing after another, the father died in the pigstye.  His son in law says he won't pay for the funeral.  The other daughter shows up and a terrible fight breaks out between the two women.  The funeral is just so hilariously nasty.
This was a really good story, better than I expected.
You can find it in the collection at this link, along with other stories.
http://manybooks.net/titles/variousetext058pltl10.html
Mel u

Email ThisBlogThis!Share to TwitterShare to FacebookShare to Pinterest
Labels: Poland

I have a fondness for East European Writers & this sounds wonderful, horrible & hilariously absurd, will check the author out.

Parrish, thanks for the comment as always. I guess the darkness reflects the bleak history and the legacy of Kafka