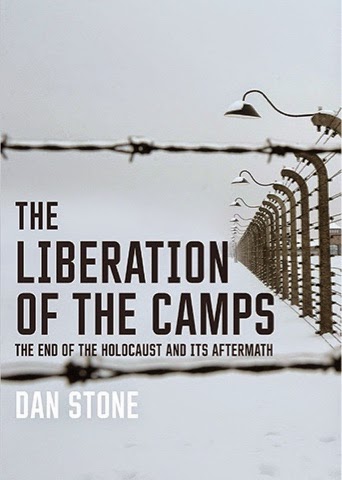 Seventy years ago Russian, American, and British troops liberated the German concentration camps.  Dan Stone says, and I fully agree, that the attempt of the Germans to wipe Jews from the face of the earth is the lowest depth to which humanity has yet sunk.  In reading Stone's beautifully  done book, The Liberation of the Camps I learned a great deal about the Holocaust and I learned a lot of what I thought I knew was wrong.   I also came to see that the consequences of the Holocaust are still today a very powerful factor shaping the dynamics of international politics.
Stone, a leading Holocaust scholar, focuses on the process of liberation of the camps, the immediate reaction of inmates, the devastating impact the horrors they saw had on often very young allied soldiers, the manipulation of media presentation of the liberation of camps,the terrible difficulties inmates,many captives for years, had returning to freedom when all those they knew had been killed, and the long term political consequences of the Holocaust.
I was under the impression that a majority of those killed by the Germans died in gas chambers in the camps.  This is wrong,  more were shot in the forests of Eastern Europe than died in the camps.  I also did not know that in the closing days of the war the Germans took inmates on forced marches designed to kill most of them and to keep the allies from discovering what they had done.  There were rumors throughtout the war of mass killings of Jews but no one quite believed it.  Stone  offers several elegant accounts of young soldiers entering the camps, many were impacted for life.  He also talks about the claims of Germans that they, of course, had no idea what was going on in the camps.
One of the common false notions about the liberation of the camps is that joyous crowds of inmates welcomed arriving soldiers as heroes.  In fact, most were in such degraded condition as not to be able to understand what was happening.  For propaganda purposes, the Russians made movies depicting such scenes several weeks after liberation and they were shown worldwide in movie house newsreels.
Some inmates snapped back rapidly, others died waiting to be processed out of the camp.  Others had terrible life time physical and mental problems. Stone explains all of this in a very cogent and elegant fashion.
There was much political turmoil over how released inmates should be treated.  Many returned to their former homes they once owned only to find others living their and all they knew dead.   Memoirs of the Holocaust tended to be written by those who coped best upon release, who went on to become very successful in the USA or Isreal, not by people who never recovered so most people including me do not really understand the horrible long term consequences to survivors, the guilt, the hatred, the loss of any faith as the most damaged don't write books.
Many released Jews ended up in Isreal.  The horror of their experiences lives on in the mantra "never again" even though few of those in the camps still live.
There is much more in Stone's  book.  It is horrifying in sections but it is a horror from which we should not turn away.
One of the ways to see the Holocaust is to see it as a war on a people deeply into the reading life.
I recommend this book  to anyone interested in the Holocaust and its continuing relevance.
I was kindly given a copy of this book by the publisher.
Dan Stone is professor of modern history, Royal Holloway, University of London. He has published fifteen books on the Holocaust, genocide, and twentieth-century European history, including most recently Goodbye to All That? The Story of Europe since 1945. He lives in London, UK. (From Yale University Press)
Mel u

It sounds like a powerful book. I'm interested in how the world dealt with the knowledge of what the Nazi regime had done so this should be interesting.

I watched the recent documentary 'Night Will Fall', about the documentary film by Sidney Bernstein & Alfred Hitchcock that was never actually shown. But footage must have been shown in the Allied countries soon after the war.

Jonathan, it seems after seventy years there is still much to be learned and unlearned about the Holocaust. Thanks for your visit and comment