"An Irish Problem" by Edith Sommerville and Martin Ross (1908?) 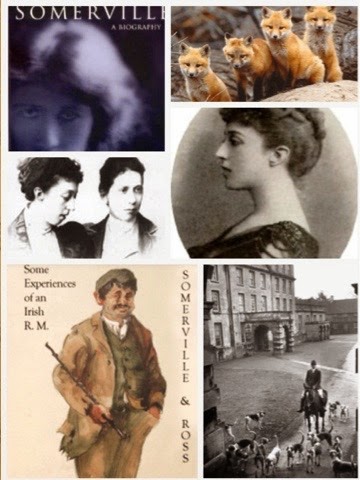 Edith Sommerville and her cousin Violet Martin (who wrote under the name Martin Ross) were to Anglo-Irish writers famous for their stories portraying the life of the Irish.  The stories tend to mock the Irish in accord with standard stereotypes of the English and I think they are not very much read anymore.  I know from Q and A sessions I have done that some find their stories offensive and not without good reason.  They do provide us with a look back at a colonial mentality and if you can step back from your politics, they are well written, interesting and often fun though the fun is at the expensive of the Irish.  I have posted on a few of their stories and I enjoyed reading them.  Declain Kiberd in his landmark book, Inventing the Nation-Modern Irish Literature devotes a lot of time to their novel, The Real Charlotte, explaining the impact of colonial rule on Irish literature.
"An Irish Problem", from Sketches on an Irish Shore, is set in a courtroom in an Irish speaking part of the country, meant to indicate a "less civilized" area, where one man is suing another for the loss of a sheep.  The man suing claims the other man's dog harassed his sheep so much that it went into a lake and drowned.  Everyone in the court knows each other and the sheep is claimed to have a value anywhere from half a crown to ten crowns, to be maybe one year old to maybe fourteen.  Each claiment shows of the exaggerated verbal skills the Irish were said portrayed as having as well as their readiness to stretch the truth.  In a way, the story whether the authors had such thoughts or not, depicts how the weaker position of a colonized person forces the development of the skills of "trickery" which are deemed contrary to proper honorable manly behaviour by the ruler.

Yes we are back!  Ruprect, Rory and Carmella
Mel u