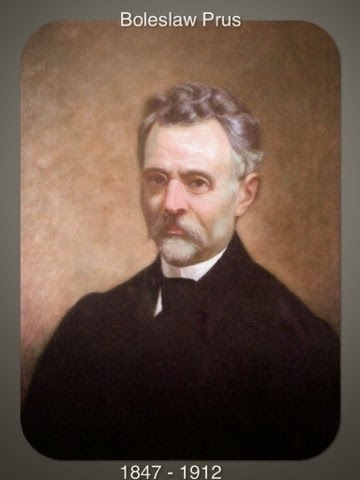 Earlier this month I read an excellant short story "The Recurring Wave" by Boleslaw Prus, one of Poland's highest regarded writers.  Set in rural Poland, it depicts a time of coming social change and different social classes in rural society.
The Outpost is one of four major novels by Prus.  It is also set in rural Poland in a time where the people are unsettled by changes they see coming and fear.  There are basically four sorts of people in the world of The Outpost.  There are the peasants, almost all illiterate and just a generation or so from being bound serfs, the gentry, the Jews who control much of the trade, and the newly arriving Germans.  I tried to decide how I should take the treatment of Jews in the novel, there is no rampant hatred but they are consistently dealt with in a negative way.  I really could not come to any conclusions concerning this.  The Germans arrive in droves, trying to buy up land at higher prices than the old market, financed by Bismark who has his hidden motives.  Poland was under the Russian Czar at this time and I enjoyed it when the lead character talked about how much a better man the Czar was than the Kaiser. Of course the irony is the Czar could care less about Polish peasants.   The peasant whom the novel centers on will not sell his land no matter what.  Everything is further unsettled as there are land reformations coming that are said to place more land in the hand of the peasants.
Prus did an excellant job with the lead character, his wife, his family, and his home. We even get to know the names of his cows!  Soon we learn a railroad is coming through.  The family suffers a lot of terrible hardships.  It was very sad when Lyza, one of the cows, had to be sold to a butcher.  Peasants still very much depend on the local squires for work, income, and directions.  It creates a great social gap when the local squire sells his land to the Germans and moves to Warsaw.
The Outpost is very much worth reading, not just an item of historical interest.  It kept me interested throughout.
If you want to read this go to Manybooks.net and search for "Polish".  Two very good collections  from 1924, originally published by Basil Blackwell, can be downloaded for free.
The Doll, set in Warsaw in the 1880s, is considered the author's masterwork and I hope to start it soon.
Mel u

I have a liking for east european books & free ones make that more so.

I'm glad you enjoyed reading The Outpost, Mel. Thanks for the info about Manybooks.net.