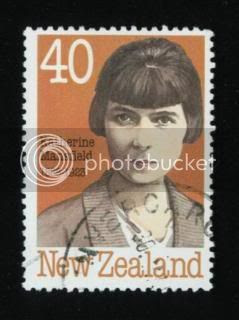 "Pension Seguin" by Katherine Mansfield (1888 to 1923-New Zealand) was first published in 1913 and anthologized by her husband, John Middleton Murry in 1924 in the collection Something Childish and Other Stories.

Many of Katherine Mansfield's stories revolve around a woman, normally young but not always, observing people she does not know in a public setting.     In some cases the observer is very detached and we can accept her superiority to those she observers such as we see in "German Meat".    In one of her very best stories, "Miss Brill" in the end the joke is on the observer.

"Pension Sequin" is set in a French boarding house.    It seems to me that Mansfield was not neutral in her attitude toward continental Europeans.      Germans are either figures of fun or like to gorge themselves on rich heavy foods,   the French are snobbish and have a false veneer of culture whereas Russians are seen as exotic and beautiful, of course only the richest Russians could travel to London at the time.

The lead character in the story is looking for a room to rent in a boarding house.   Here is her first impression:

THE servant who opened the door was twin sister to that efficient and hideous creature bearing a soup tureen into the First French Picture. Her round red face shone like freshly washed china. She had a pair of immense bare arms to match, and a quantity of mottled hair arranged in a sort of bow. I stammered in a ridiculous, breathless fashion, as though a pack of Russian wolves were behind me, rather than five flights of beautifully polished French stairs.


After being advised that there is a room luckily available due to the recent return of its occupant to Argentina the narrator bargains a bit and settles on the room for two months.    The description of a luncheon is very typical Mansfield:

Soup was followed by chestnuts and Brussels sprouts. All the time the Russian priest, who wore a pale blue tie with a buttoned frock coat and a moustache fierce as a Gogol novel, kept up a flow of conversation with Mademoiselle Ambatielos. She looked very young. She was stout, with a high firm bust decorated with a spray of artificial roses. She never ceased touching the roses or her blouse or hair, or looking at her hands—with a smile trembling on her mouth and her blue eyes wide and staring. She seemed half intoxicated with her fresh young body.


Gogol's Dead Souls   was first translated into English in 1842.      "Pension Sequin" is a very typical Mansfield  story.     There are layers of irony buried on top of each other and the narrator is partially very perceptive and partially silly and pretentious.    It is also funny and a pleasure to read.

It can be read online here