"The Returning Wave" by Boleslaw Prus (1880, translated by Else Benecke) 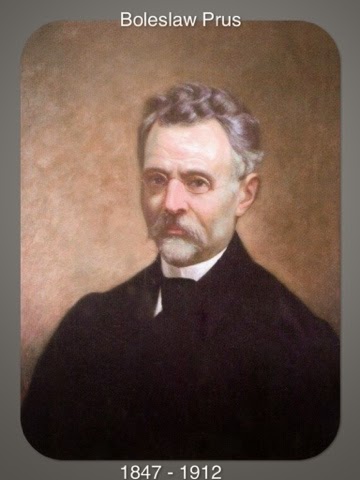 Lately I have been getting into literature of the old Austro-Hungarian Empire countries and Yiddish literature.  I have felt a need to expand into Eastern Europe.  I looked for some reading ideas on the webpage of The New York Review of Books, always a good source.  One writer that caught my eye, I admit I had not previously heard of him, was Boleslaw Prus, from Poland.  I bit of Google searching soon exposed once again the depths of my ignorance when I discovered he is considered Poland's  greatest realistic writer.  He was very influenced by Mark Twain and Charles Dickens as well as the French leviathans Balzac, Hugo, Flaubert, and Zola.   He wrote in addition to several novels a number of short stories.
I prefer when possible to post on works others can easily read for free if they like so I was glad to find a near novella length work by Prus in a collection of Polish short stories on Manybooks.  "The Returning Wave" centers on three men, a factory owner and a cleric, in a small town in Poland who have been friends for decades. The third principal character is the playboy son of the factory owner.  As the years went by the factory owner got richer and richer.  He would always say once he got just a little more money he would sell the factory and enjoy life. A widower, all ever did was work and worry over his son.  He wanted his  son to enjoy life so he over indulged him and heard from him only when he needed money.  One day the son shows up after a long hiatus to his father's great joy.  He learns the boy has huge gambling debts.  He pays them and to make up for it he lowers the pay of the factory workers, makes them work longer, and drives himself harder.  Of course the son promises reform and goes to work as assistant factory manager.  Soon the workers figure out he is why they have lost pay and he actually ferments discontent among the workers.  To make it worst the son tries  to seduce the virginal daughter of the cleric.  The owner begins to drive the workers harder and harder and speculated in cotton.
"The Returning Wave" does a wonderful job of bringing the factory owner, easily a character that could have been created by Balzac, and his plans to enjoy life soon to an excellent realization.   We learn a lot about factory life.  Some of the long term workers just silently accept any abuse and others make us sense a great underlying social upheaval might be coming.  The ending of the story is really powerful and very shocking, in no way did I see it coming.
There are a few more Prus stories online and I hope to read them and some of his novels.
You can download the story HERE
Winston's Dad, a blog focusing on quality literature in translation, which I have been following for a long time, is conducting an event devoted to Eastern European Literature this month.  This post is my initial participation in the event.  If you are at all interested in this rich reading life area, I suggest you look at the event page and participate if you can.
Eastern European Literature Month on Winston's Dad
From the webpage of the New York Review of Books.

Bolesław Prus (1847–1912) was born Aleksander Głowacki in the provincial town of Hrubieszów, Poland. His mother died in 1850; his father, an estate steward of noble birth (the author’s pen name is a reference to the family’s origin near the Prussian border), died six years later, leaving him in the care of relatives in Puławy and Lublin. In 1862, he moved to Kielce with his older brother Leon, a Polish patriot. The next year, the teenaged Aleksander joined in the January 1863 uprising against Russian rule. Wounded in battle, he was imprisoned in Lublin Castle, but released when he was discovered to be underage. He then finished high school and enrolled in university, but lacked the funds to graduate. Instead, he worked several odd jobs, including a stint in a metallurgical factory, before taking up journalism. Prus eventually made a name for himself as a writer of feuilletons, publishing his much-admired Kroniki in the Kurier Warszawski between 1875 and 1887, and also achieved some success with his short stories. The Outpost, published in 1885, was the first of four novels that secured his literary reputation. It was followed by The Doll (1890), Emancipated Women (1894), and The Pharaoh (1897). A respected but no longer fashionable writer, Prus dedicated his last years to social reform and philanthropic work.

You should definitely read The Doll. It's my favourite :)

Kinga, I bought The Doll yesterday and am really looking forward to reading it. Thanks for your suggestion.