"Teach Us To Outgrow Our Madness" by Kenzaburo Oe

Teach Us To Outgrow Our Madness by Kenzaburo Oe (1969, translated from Japanese by John Nathan 1977-50 pages) is included in the collection of the same name introduced  by John Nathan.   There are four novellas in this collection.   I have already posted on three of them.   I loved each of these works.   Kenzaburo Oe is now on my "Read everything they have written list" along with Junichiro Tanizaki and Banana Yoshimoto. 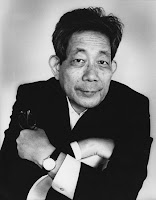 Teach Us To Outgrow Our Madness is perhaps the strangest novella in the collection and this is saying a great deal!   I was so struck by the opening few lines that I had to read them several times.

In the winter of 196-, an outlandishly fat man came close to being thrown to a polar bear bathing in a filthy pool below him and had the experience of very nearly going mad.   As a result, the fat man was liberated from the fetters of an old obsession, but the minute he found himself free  a miserable loneliness rose in him and withered his already slender spirit.   Thereupon, he resolved, for no logical reason..to cast off still another heavy restraint;  he vowed to free himself entirely and let the sky tilt if need be, and when he had taken his oath and a reckless courage was boiling in his body..he telephoned his mother in the middle of the night and said to her,   ---you give me back the manuscript you stole from me, I'm fed up, do you hear!   I have known all along what your are up to!.

As Oe has explained in his Nobel Lecture, 1994, the most important event in his adult life was the birth of a son with an incurable brain defect that would leave him severely handicapped for life.   (In this lecture Oe also talks about his literary influences, his reaction to the atomic bomb blasts,  the birth of his handicapped son and his feelings about modern Japan.   If you at all interested in Oe you really should read this speech.)

The lead character was once slender.   When his brain damaged son is born he begins to eat and eat and becomes immensely fat.   He refers over and over to his son as an "idiot".  (More than one source has verified that the Japanese term in the original text is just as  harsh a label as "idiot" is for a brain damaged person.)    I think the narrator wants to avoid hiding from himself the nature of his son's handicap.   He is being starkly honest.   The jarring nature of the word "idiot" in this context seems to be the narrator's attempt to remove the world's ability to use a label to hurt him or his son.   He becomes hugely fat in order to share a handicap with his son and to seem like an idiot to those who see him.   In a way he is telling the world he cares nothing for them.   His son also becomes very very fat.   Through his weight, the narrator has made himself handicapped and the ignorant  see him as mentally slow.   The world wants to throw him into a polar bear pit.   The narrator's father went into an extreme period of withdrawal from the world.   His mother knows why he did this and eventually the father dies as a result of this.   It is explained in the stolen manuscript.

I am not normally into the use of the life of a writer as an artistic  explanation for his works but Oe himself has said that the birth and life of his handicapped son in the most important personal factor in shaping his work.   (The son, though never escaping his brain damage, became a very famous composer of music.   The story is explained in the Nobel Lecture.)    Teach Us To Outgrow Our Madness, like the other works in  the collection of that name, are not just stories but the direct creation of wisdom.

I read for the 3rd time the Nobel Speech of Oe as I was writing this post.   Here is how he sees himself as a novelist.

I am one of the writers who wish to create serious works of literature which dissociate themselves from those novels which are mere reflections of the vast consumer cultures of Tokyo and the subcultures of the world at large. What kind of identity as a Japanese should I seek? W.H. Auden once defined the novelist as follows:

Be just, among the Filthy filthy too,

And in his own weak person, if he can,

Must suffer dully all the wrongs of Man.

The full text of W. H. Auden's The Novelist can be read here

Isn't he amazing? I have only read one book by him but that single one has made him my most favourite Japanese author ever. Love his writing so much that I will also read everything written by him. Thanks for the link to his speech.

Now Oe is on my must-read list. "Not just stories but the direct creation of wisdom"--his work sounds truly fascinating.

I've really got to read another Oe soon..the last one i read was 'O'Rouse up Young Men of the New Age',which touches on his thoughts about Mishima,if i remember rightly..,and again writes about his son.